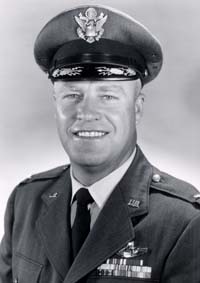 Ernest L. Poulson joined the Utah National Guard in 1939 and was called to active duty in March 1941. After completing B-24 training, he joined the 389th Bomb Group in England. Two weeks later, they were transferred to Benghazi, Libya. Operation Tidal Wave, perhaps the best-known air raid of World War II, called for five bomb groups to destroy the Romanian oil refineries at Ploesti, which supplied one-third of Germany’s fuel oil. On August 1, 1943, the raiders took off. The 389th bomb group’s target, Campina, located 25 miles north of Ploesti, was the most destroyed of the refineries in the raid. But in reaching the valley adjacent to Campina, they had to make a wide 360-degree turn, giving the enemy ­additional time to respond. After encountering ground fire, Poulson’s plane lost aileron and rudder control and had fire in one engine. Unable to turn, they were obliged to head straight down into a riverbed, resulting in severe causalities. Wounded, Poulson headed into a field but the Romanians began ­shooting through the corn stalks, compelling him to surrender. Of the 178 B-24s involved in Operation Tidal Wave, approximately 550 airmen were shot down and only 110 survived to become ­prisoners.

Poulson and the other POWs eventually were moved to a prison camp near the Hungarian ­border where they remained for 10 months. The camp was situated on a rail line and as the German retreat became visible, a number of prisoners—including Poulson—escaped. They were retrieved by American forces and taken back to Italy. He received the Distinguished Flying Cross and Purple Heart.

Poulson returned to the United States and after the war, applied for a regular commission. He was assigned to form the first ROTC unit at the University of Utah. He subsequently filled many responsible positions with the U.S. Air Force, his final assignment as deputy and chief of the ATLAS Weapon System and ATLAS Integration Division. Colonel Poulson considers this his most significant accomplishment. He retired from the Air Force in 1961.