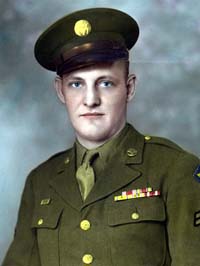 As a boy, Henry Patton loved watching airplanes and knew he wanted to fly. In 1940, he enlisted in the Army Air Corps and was sent for training to Clark Field in the Philippines. On December 8, 1941, across the International Date Line from the United States, Patton heard about the attack on Pearl Harbor. Assigned to the 2nd Observation Squadron as a radio operator, he rushed to the airfield and took off in an O-52. By the next evening, he had been shot down three separate times.

As a member of the 4th Marine Division, he fought on the Bataan Peninsula, surrendered in April 1942, and began the infamous Bataan Death March. After five days without food or water, he escaped into the jungle. Suffering from illness, Patton was nursed back to health by native Filipinos who risked their own lives to protect him. He joined their resistance movement and for a year-and-a-half, led the Filipino Scouts in hit-and-run attacks.

In October 1943, they were caught and forced to surrender. With other American prisoners, Patton endured horrible torture at Bilibid Prison, which left only 17 of the 63 alive. Eventually, they were shipped to Japan to work in the steel mills and coal mines. While enroute however, American submarines sank the Japanese ship carrying the POWs. Of some 1,200 prisoners, just 53 survived. In May 1945 a B-29 began flying over the prison camp every day. “Lonesome Joe,” as the prisoners called it, was likely conducting reconnaissance. American air raids began in June. On August 15, 1945, the surrender of Japan was announced over the camp’s speakers. In September, the camp was liberated. Patton weighed 67 pounds, down from 180 at the beginning of the war. A few days later, Patton and several friends visited the destroyed city of Hiroshima. He and his comrades later developed cancer.

Patton returned home in October 1945 having earned the Bronze Star. Of the 384 men who had been a part of the 2nd Observation Squadron in 1940, only 10 survived.