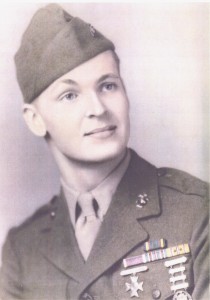 Because he could not join the Army until he was 18, 17-year-old Clyde E. Weeks, Jr., a student at the University of Utah, enlisted in the US Marine Corps on February 15, 1943. He had been imbued with a sense of duty to country as a Boy Scout, inspired by his father’s service in the Army as a member of Gen. Eisenhower’s staff in England, and motivated by the prior enlistment of over 150 former classmates from Orem, Utah.

Weeks enlisted in Salt Lake City and was put in charge of the other Marine recruits leaving on the next train to San Diego for boot camp. In addition to the arduous training of combat infantry, Weeks developed a specialty as a telephone lineman, charged with establishing and maintaining copper wire telephone connections between battle stations.

After further training in Hawaii, Weeks’ unit, the 1st Provisional Marine Brigade, embarked on a warship for Kwajalein Atoll in the South Pacific. On board, Weeks bought a violin from another shipmate and soon was playing requests for his comrades.

On January 31, 1944 Weeks climbed down a rope ladder with his battle gear and telephone equipment, including a roll of wire. As they approached the shores of Kwajalein, they faced an onslaught of fire from machine guns and hand grenades. Digging shallow foxholes, those who were uninjured moved forward with steady fire. After four days of battle, the enemy was defeated and Weeks was now a well-seasoned fighting Marine, ready to undertake his next challenge: the invasion of nearby Eniwetok Atoll.

Weeks’ brigade returned to Hawaii for more training and replacement of personnel losses. On July 21, 1944, they waded in hip-high water toward the well-hidden and hostile defenses on Guam. Advancing under relentless fury from the enemy’s artillery, Weeks reached the beach unscathed and set up his communication equipment in a foxhole. By nightfall, a secure beachhead was achieved.

For the next eight days, Weeks provided communications for his unit as they fought toward Agana, the embattled capital city of Guam. As they moved forward, they encountered a concrete bunker from which Japanese soldiers fiercely returned fire. A grenade exploded at Weeks’ feet, blowing him to the ground and badly injuring his legs. He lost consciousness and two corpsmen carried him through heavy fire to safety on the beach. After two weeks of intense fighting by 36,000 Marines and Army troops, the battle was over at a cost of 1,747 Americans killed and 6,053 wounded.

On a hospital ship, surgeons removed 22 grenade fragments from Weeks’ body and put him in a cast from should to toes that he wore for months. He was treated at the Pearl Harbor Naval Hospital and at six different hospitals in the U.S. throughout the next year. He was released from the VA hospital in Salt Lake City a week after the war ended in August, 1945. Wearing his Purple Heart, Weeks finally returned home to Orem, where he served as Postmaster for 40 years.

To this day, Weeks remembers and mourns his Marine compatriots who did not make it home like he did. He believes they are the true heroes.