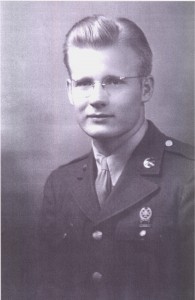 Joseph Stobbe’s military experiences began in the Reserve Officer Corps program at East High School. After high school, Stobbe attended the University of Utah, where he completed three years of pre-medical curriculum before serving an LDS mission in New England.

Stobbe volunteered for the military draft and entered the Army on September 25, 1943. He went to basic training at Fort Fanning, Texas, where he became an expert in firing the M-1 rifle and served as a squad leader on various exercises.

In the spring of 1944, Stobbe sailed on a troop ship from New York City and arrived at Normandy’s Utah Beach on June 16 (D+10).  He was assigned to Company G, 358th Regiment, 90th Infantry Division and became a sniper.

As a Staff Sergeant, in September 1944 Stobbe led a night reconnaissance patrol across the Moselle River to ascertain whether the German units in that area were withdrawing or reinforcing the town of Metz.  Stobbe received a bronze star for sending his soldiers back across the river while he stayed on the enemy’s side to cover the patrol’s withdrawal to safety.

On November 16, 1944, while Stobbe moved with his unit through the northern approach to the town of Metzervisse, a German threw a grenade at him. One of Stobbe’s soldiers shot at the German but the soldier’s bullet ricocheted off a building’s wall and went through the back Stobbe’s left elbow.  Making his way to an aid station a few miles away, he was treated for his wound and sent to a hospital in Luxembourg.  From Luxembourg Stobbe went to Reims, then on to a hospital in Paris just before Christmas.  Finally, he ended up in a hospital in England. He received a third Purple Heart for this wound and learned he would not go back into combat. In the spring of 1945, he returned to the U.S. on a hospital ship.  En route home, Stobbe requested a month’s leave to get married in Salt Lake City.

Back in civilian life, Stobbe returned to medical school at the University of Utah. After graduating, he interned at a naval hospital in Jacksonville, Florida from June 1949 to May 1950. He specialized in OB/GYN, and has delivered thousands of babies. In 2005, the America’s Freedom Festival in Provo, Utah honored Stobbe by presenting him with the Freedom Award.