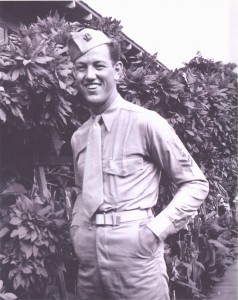 Paul Smith joined the Navy in November 1942, attended boot camp in Idaho, and volunteered for the hospital corps, becoming what was colloquially known as a “corpsman.”  Once he was sent overseas, he was assigned as a replacement to the 22nd Marine Regiment, which was assigned a part of the First Provisional Marine Brigade. His first day in combat was July 21, 1944, the day of the US landing in Guam.

Smith’s unit was on the extreme left flank during the landing on the south side the island, and Smith felt himself lucky because the firing was not as intense there.  He recalls the first day – in which he treated 20-25 wounded Marines – being very tough. It turns out Smith may have been luckier than he thought.  There were Marines on either side of him shot by machine gun fire, which must have just missed him.  Only a few feet away another buddy was shot in the leg by the same machine gun fire that had hit the other two men, and Smith recalls laying the wounded man on a poncho and recruiting a couple of Marines to help him carry his comrade back.  As they carried him, they had to keep dropping to the ground to avoid the ever-present machine gun fire.  The Marine holding the corner of the poncho supporting the injured leg was not careful enough with the leg, so Smith switched corners with him.  Only a few steps later, that same man was shot through the shoulder.

Smith put the patient in the top stretcher slot in the ambulance, and was holding up a bag of plasma for when a machine gun burst sounded.  Smith dropped to the ground, and the plasma splattered everywhere.  Smith saw smoke from his pants, and he realized that a bullet had gone through his leg, just missing his femur.  When they assessed the wounded, Smith found that his injury was the least severe, so the ambulance was filled with other wounded men and Smith had to hold on to the back of the ambulance to make it back to the battalion aid station.  He was later evacuated to a medical ship and then to Guam for treatment.  That was his last day in combat – the battle of Okinawa ended before Smith could return to the front.

Looking back on his time in service, Smith reflects often on the fates of the men he knew in combat.  He recalls the names and hometowns of the men he treated, and he wonders often whether they survived their wounds and the war.  “I’d give anything to know what happened to them,” he says.