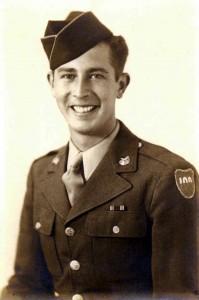 Charles R. Hughes was born in Coatesville, PA, where his family owned a small farm and grew tobacco and tomatoes. When WWII broke, Hughes was enrolled in West Chester State Teachers College. In 1942, he enlisted in the Army to take advantage of a rigorous engineering program that allowed recruits to stay in college as long as they kept up their grades.

The Army moved all of those in the engineering program to the infantry when things got tough for the allies in North Africa. Soon, Hughes was on a freight train to basic training in Georgia. His test scores were so high upon graduation that he was allowed to choose to go to engineering school in Washington, PA, but after 6 months, the school was closed. Hughes was eventually assigned to E Company, 379th Infantry Regiment of the 95th Infantry Division heading overseas to France. They entered combat in October, 1944.

On the front line, a less-than-supportive sergeant made Hughes the unit’s First Scout and gave him extra tracer rounds with which to draw fire from a position about 100 yards ahead of the rest of the unit. The First Scout’s average life expectancy at that time was 15 minutes. Hughes filled this assignment for over two months before he was promoted to Staff Sergeant and squad leader.

On the morning of April 12, 1945 Hughes and his squad were assigned to clear the last in a group of houses they had to pass. Hughes had sent out his first scouts but they failed to return so he assumed that role. The unit had not gone far when machine gun fire erupted. A tank destroyer pinned down the machine gunners and allowed his men to move single- file along the narrow street.

Hughes was hit and his left leg was shattered.  He dropped into a small ditch behind a hedge between him and the trooper who shot him. Having lost his rifle, Hughes pulled the pin on a grenade and threw it through the window of the house, killing the men inside. The trooper who had shot him was outside the house, however, so Hughes threw his second grenade, bouncing it off the wall of the building across the road so it would land right in front of the SS trooper. The plan worked.

Just after that grenade exploded, one of his men dropped into the ditch and landed on his wounded leg. Hughes passed out. A medic dressed his wounds and carried him back to a jeep, where Hughes saw the only surviving SS trooper from the battle lying on a stretcher. Hughes learned that he himself had killed nearly the entire enemy squad.