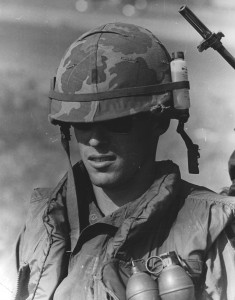 Ed HerrNeckar entered the US Army in 1958 and served the first eight years as an enlisted man.  After an initial stateside assignment with the Air Defense Artillery, he served in the Republic of Panama.  He was then assigned to the United States Military Academy at West Point where he took a colonel’s advice and applied for Officers Candidate School.

Commissioned in the Signal Corps, HerrNeckar was subsequently sent to the Republic of Vietnam and served with the 221st Signal Company and the 69th Signal Battalion.  For a short time he was attached to the 101st Airborne Division in Chu Lai where he led a Combat Photographic Team supporting patrols in the area.

After returning to his unit in Saigon, HerrNeckar was caught up in the Tet Offensive of 1968, where he helped a reaction force clear an Air Force compound that had been overrun by enemy attackers. HerrNeckar went down an alley under fire and dragged a stalled jeep out by crawling on his back under the vehicle.  This opened the way for US forces to advance and recover the compound.  For this, HerrNeckar was awarded the Bronze Star for heroism in ground combat.

Upon returning from Vietnam, HerrNeckar went to flight school and was trained on the AH-1G Cobra attack helicopter. He went back to Vietnam in 1970 as a pilot with D Troop/1st Squadron/1st Cavalry Regiment of the Americal Division, where he flew missions in support of various operations and units.  While supporting the 5th Special Force Group he put his Cobra between enemy fire and a Special Forces team being extracted.  He received and returned fire and remained at a hover while the A-Team was safely extracted.  Two UH-1 helicopters were shot down in this operation and two of the eight crewmembers were killed in action.  HerrNeckar says this story cannot be told without remembering the two pilots that made the ultimate sacrifice. For this action he received the Air Medal for heroism in Aerial Flight.

Having served 20 years in the Army and having done two tours in the Republic of Vietnam, HerrNeckar