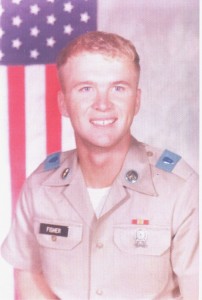 Kim Fisher entered the US Army just prior to his 22nd birthday, after completing an LDS mission to Germany in 1968. He served for two years on active duty.  After basic training and infantry training, Fisher was sent to the Non-commissioned Officer (NCO) Academy and graduated with the rank of Staff Sergeant well in advance of his peers. He then attended the US Army Ranger School but was reassigned before completing that training back to the NCO Academy as a Tactical Sergeant or Tac.  He instructed other soldiers on how a sergeant in the US Army was expected to perform and gave them the skills to succeed in that role.  In September of 1969, he was assigned to the 25th Infantry Division (“Tropic Lightning”) in the Republic of Vietnam.

Fisher’s tour in Vietnam continued the trend his career had taken so far with his assignment as a platoon sergeant with C Company/4th Battalion/23rd Infantry Regiment, a position usually taken by a Non-Commissioned Officer with much more time in Army. Fisher only had about a year in the Army. Due to the vagaries of service he was frequently without an officer and performed the duties of both platoon leader and platoon sergeant himself.

During this time he was awarded the Silver Star twice for actions in contact with the enemy.  In one particular incident, he performed first aid on one of his soldiers while pinned down under heavy automatic weapons fire from the enemy.  He was able to drag the wounded soldier to a covered position when a mortar round landed at his feet.  Luckily, it was a dud.

Fisher says all he ever wanted to do was help his fellow soldiers survive and get back home.  After returning home himself, he graduated from the University of Utah and then went on to dental school and became a successful dentist.