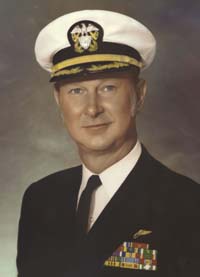 Dale Osborne served as a naval aviator in a variety of assignments that included two combat tours as a carrier pilot on the USS Hancock during the Vietnam War. American pilots flying missions over North Vietnam faced elaborate anti-aircraft defenses that included more than 8,000 anti-aircraft guns, 25 surface-to-air missile battalions, 200 radar sites and enemy aircraft. In September, 1968, Osborne’s A4F Skyhawk was hit by 57mm artillery flak over North Vietnam. Although severely injured, he managed to eject from his plane and was immediately captured. Alone, without medical assistance, once left for dead, Osborne was force-marched for seventeen days to prison in Hanoi where he endured four-and-a-half years of captivity. He is the recipient of the Silver Star, the Bronze Star, and two Purple Hearts.