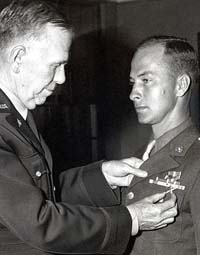 Eugene Nielsen joined the U.S. Army in January, 1941 and was assigned to the 57th Coast Artillery Battalion for the defense of the Philippines at Corregidor. He was captured by Japanese forces in May, 1942 and subjected to more than two-and-a-half years of starvation, disease and slave labor. In December, 1944, Nielsen and his contingent of 150 POW’s were on Palawan Island when their Japanese captors ordered the mass execution of all prisoners. The POWs were forced into trenches, doused with gasoline, lit afire and machine-gunned. Miraculously, Neilsen managed to escape the inferno and made his way to the beach where he was shot by guards while swimming to freedom. He swam for nearly nine hours to a neighboring island where he was rescued by Filipino guerrillas. In February, 1945, Nielsen was personally presented the Bronze Star by General George Marshall.