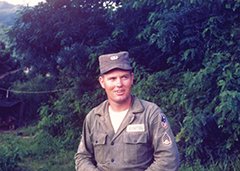 Donald E. Curtis enlisted in the Army as a parachutist in February 1951, continuing a family tradition of service and patriotism. The first time Curtis ever flew in an airplane was during jump school at Fort Benning, Georgia. He took off seven times before he actually landed in one. Following basic training Curtis went directly to Japan where he was assigned to the 187th Airborne Regimental Combat Team and was deployed with his unit to Korea in May 1952.

The fighting had stabilized around the 38th Parallel and consisted largely of small unit offensives aimed at taking and securing the most advantageous positions in anticipation of a truce. For Curtis, the safety of the men in his squad was his primary responsibility. It was because of his dedication to his men that Curtis was awarded the Bronze Star Medal with Valor. In the process of being relieved after spending two weeks protecting an artillery observation post, Curtis’ platoon lost contact with their replacements. Ordered to restore communication by running a new telephone wire, Curtis and his men were nearly to the observation post when, as he recalled, “A voice came into my mind and said, ‘Don’t go up there.’” Curtis yelled to his men to drop the wire and run for cover. Almost immediately they came under an intense artillery barrage. In the midst of the shelling Curtis heard a cry for help. He left his covered position to search for the wounded soldier. By the time Curtis found him, the man had died. Unwilling to leave his comrade behind on the battlefield, Curtis carried the man back to the secure position. Immediately after returning, Curtis heard another call for help and he went back out only to find another soldier who had died from his wounds. He carried this man back to cover too. Though he risked his life to ensure that these soldiers were not left behind on the battlefield, Curtis said, “I was just doing my job trying to help people. There were probably half a dozen guys that day that could’ve earned that medal.”

Curtis was deployed to Korea a second time in the spring of 1953 to help blunt a Chinese offensive. He returned to Japan after the armistice was signed on July 27, 1953, and left the Army in December of that year. His service has been an example for his sons and grandsons who have continued the family tradition of military service.