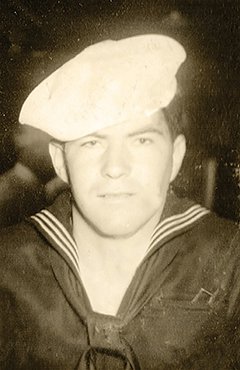 Bill Buchanan was born in Aspen, Colorado, in 1921, but was raised in the Phoenix area. In 1942, when Buchanan was a sophomore in college, he joined the Navy with three friends, hoping to fly with the Navy Air Corps. All four didn’t make the screening: One was too big, one wore glasses, one was colorblind, and the other was too small. They all had the ability to spell well, so they enlisted in the Navy and were accepted into the Signal Corps. A few months after Pearl Harbor, Buchanan remembers marching with 500 other recruits down the main street of Phoenix behind a model of the USS Arizona. “When the attack on Pearl Harbor happened, Yamamoto said, ‘We have awakened a sleeping giant.’ Little did he know he awakened patriots,” Buchanan said.

Buchanan trained in San Diego where he learned to communicate with nautical flags, semaphore, Morse code, and signal lamps. He was selected for the Armed Guard and sent to Connecticut for advanced training. He was assigned to the SS Irenee Dupont, a fast merchant ship carrying 3,200 tons of oil and nine crated aircraft. The ship joined a large convoy heading across the North Atlantic.

In the early morning hours of March 17, 1943, Buchanan spotted the wakes of two torpedoes off the starboard side. They slammed into the ship, flooding the lower decks, setting off the alarm to abandon ship. Buchanan dashed to the bridge, threw the communications code book overboard, and got in the last usable life raft on the ship. The raft was overloaded, leaving the men up to their waists in the cold North Atlantic water and the oil that had leaked from the ship. After several hours, they were rescued by another merchant ship and taken to Liverpool, England.

After eventually making his way back to the U.S., Buchanan was assigned to the new USS Cabot, a light carrier, for its shakedown cruise. He sailed from Chesapeake Bay to Trinidad, then through the Panama Canal, to San Diego, and then to Hawaii. From there Buchanan sailed to the Marshall Islands and took part in the invasions of Roi, Namur, Truk and Kwajalein Islands.
Soon Admiral Gerald F. Bogan requested a signalman for his crew and he chose Buchanan because of his speed and accuracy at sending signals, which required Buchanan to transfer to the USS Fanshaw Bay, an escort carrier. He took part in the operations at Saipan during which the carrier sustained such damage from bombing that Bogan transferred to the USS White Plains, another carrier. Bogan took Buchanan with him and continued the assault on Saipan and Tinian.

When Bogan was promoted to the larger fleet carriers and re-assigned to the USS Essex, he once again took Buchanan along as his signalman. The carrier commenced operations at Guam and then at Eniwetok. Buchanan followed his admiral to five more carriers, the Bunker Hill, Intrepid, Lexington, Franklin, and Randolph. He participated in the battles of the Palau Islands, Leyte Gulf. He endured two typhoons on the carriers, one with a loss of 700 sailors. He witnessed kamikaze planes diving into the carriers he was aboard, killing shipmates and disabling the ship. At the end of the war, he was part of the American Task Force that sailed into Tokyo Bay to accept the surrender of Imperial Japan. He recalled being able to see the events on the USS Missouri through field glasses.

In total Buchanan served on seven aircraft carriers and one civilian ship during his three years of service.

“I have no regrets, no hard feeling for the Japanese. I know for sure we are much better off for winning the war,” Buchanan said. “I can’t visualize what our lives would be if we wouldn’t have won that war. It would have been a catastrophe.”