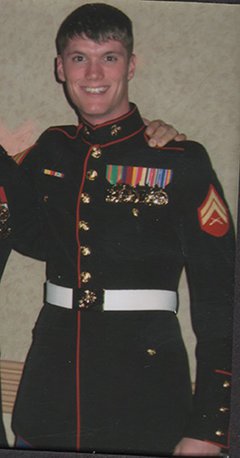 John Angell enlisted in the Marine Corps in June 2003 from South Bend, Indiana. He was initially trained as an infantryman and later as an intelligence specialist. In 2004, during his first Iraq deployment, Angell was a Lance Corporal assigned to B Company, 1st Battalion, 4th Marines in An Najaf, Iraq. Angell was part of the personal security detail assigned to protect his company commander, Captain Sam Corassco, as he moved around B Company’s area of operations. While traveling in an Amtrak in Najaf’s Wadi Al-Salaam Cemetery, the largest cemetery in the world, the company commander dismounted to check on some of his Marines who were occupying positions there. Angell and the rest of the detail set up a perimeter along the streets of the cemetery and took a knee. While observing down the street that ran through his area of responsibility Angell observed several armed Iraqi moving from one side of the road to another. The Rules of Engagement required that weapons had to be pointed at Marines before they could engage so Angell reported his sighting through the security net but did not fire. Soon thereafter Angell and the remainder of the detail started receiving incoming fire from several locations. During the course of the fight a mortar blast just on the other side of a flimsy wall Angell was using for cover blew him down, concussed, and severely disoriented him. He knew he was down and was trying to get to his feet to get back into the fight but the force of the blast prevented him from thinking clearly or moving with a purpose. Corassco grabbed the handle on the back of Angell’s combat vest and dragged him towards cover, all the while under fire. Angell reached safety, still suffering from the effects of the mortar, and the unit left the area but Angell felt the blast effects for several days. After recovering he returned to duty, but still suffered from the effects of the blast.

In a later incident, also with 1-4 Marines, Angell and a Marine were moving across an open area when they were brought under fire from nearby buildings. While the rest of his unit provided covering fire the two took what cover they could in the open and returned fire themselves. During the course of the fight a mortar round landed between the two and Angell was again concussed by the blast. This was the second time he had been injured by concussion from indirect fire and, afterwards, he manifested the symptoms of Traumatic Brain Injury (TBI) and was medevaced out of theater.

In total Angell was deployed three times between 2004 and 2008 as a combat infantryman in 1st Battalion, 4th Marine Regiment. Angell was eventually medically discharged from the Marine Corps in 2013 with a 100 percent disability rating due to his combat injuries. Since then Angell underwent five surgeries and had an electronic device implanted in his head to control the symptoms of his TBI. At the time TBI injured warriors were not awarded the Purple Heart for combat wounds but such is not the case now and Angell in awaiting the award of the Purple Heart from the Marine Corps.