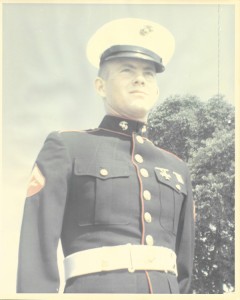 Sergeant Don Sellers entered service on June 5, 1964 in Little Rock, AR.  As a member of the 1st Battalion, 4th Marine Regiment, he did a tour in Vietnam in 1968 and served as Platoon Sergeant at the Battle of Cam Lo, eventually serving as Platoon Leader.

On February 1, Sellers and two squads from his platoon reinforced a Combined Action Company outpost at the Cam Lo District Headquarters in Quang Tri Province.  They reinforced ninety South Vietnamese Popular Force troops who had four American advisors with them.   That night, they were attacked by North Vietnamese Regulars.

The attack began with mortar and RPG fire that destroyed the two American vehicles that had heavy machineguns mounted and killed the senior American present.  Most of the Popular Force troops abandoned their positions and left the defense of the outpost to the 44 Marines in Sellers’s platoon.  Over the next five hours, the North Vietnamese Army launched three assaults against the outpost.  At the beginning of the battle, Sellers manned an exposed machinegun, silencing multiple enemy mortar and recoilless rifle positions.  Then, Sellers maneuvered about the fire-swept outpost, in disregard of his own safety, to move wounded men to safety and to reposition Marines to have the most effective defense against the advancing enemy.  He also found and distributed ammunition, which was in very short supply as the attack wore on; at one point, Sellers hauled an 80 pound box of 40 mm grenades up a ladder to an exposed tower to resupply the platoon’s grenadier.

The platoon of Marines held the outpost, not once allowing their perimeter to be breached.  Two Marines were killed, including Corporal Larry L. Maxam, who was posthumously awarded the Medal of Honor.  Sellers earned the Silver Star for his courageous actions and superior leadership during the assault on Cam Lo.

Today, Sellers remarks, “It’s incomprehensible that we survived.”  The truth is that the North Vietnamese Army made the mistake of attacking an outpost held by a disciplined, well-trained Marine platoon led by Sellers.  Sellers and his wife live in Ogden and train rescue dogs for Paws for Patriots.