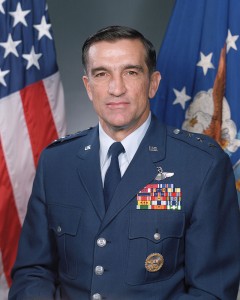 Upon entering the inaugural class of the Air Force Academy in 1955, General Robert Oaks was destined for a long and illustrious career in the military that nearly came to an abrupt halt in the spring of 1966.

The Vietnam War was underway, and Oaks found himself involved, providing close air support to Army troops 120 miles away in the Mekong Delta. On March 30, 1966, he was tasked with a mission for which he was not originally slated.  Taking another pilot’s place, he led the formation to bomb Viet Cong soldiers threatening U.S. troops.  On his third pass, his aircraft was hit by enemy machine gun fire.  The damage to his F-100D was severe enough that he would need to break off and return to base; however, Saigon was too far for his plane go safely, so he decided to land at Soc Trang airfield.

Monitoring the integrity of the damaged plane, his wingman radioed to Oaks, “You’re burning badly!” The hope of returning to a friendly airfield evaporated when the aircraft became uncontrollable, forcing Oaks to eject and immediately discover his next life-threatening dilemma – his parachute did not open.  Through the confusion and terror of this violent plummet, Oaks managed to pull the rip cord to deploy his canopy with only 1,500 feet remaining in his fall.  This action, combined with the helmet he wore, protected him well enough to survive, but the hard landing knocked him out.  When he regained consciousness, he employed his survival radio to coordinate a rescue.  Army helicopters arrived and took him to Soc Trang for a medical evaluation.  Once cleared for flight, Oaks found himself in the cockpit a mere two days after the mission for which he earned the Distinguished Flying Cross.  In total, he flew 188 missions in Southeast Asia.

Surviving and persevering through this experience prepared Oaks for a life of continued service and leadership that spanned 34 years in the military, with multiple staff and command assignments, culminating in his appointment as Commander in Chief, U.S. Air Forces in Europe, and Commander, Allied Air Forces Central Europe.  Over the course of his career, he flew more than 4,000 hours, of which more than 300 were combat hours. Although he retired in 1994 and left his military duties, he still took on other responsibilities and callings.