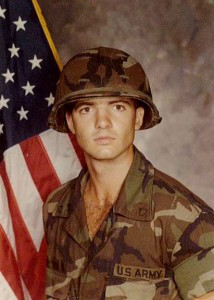 While assigned to Afghanistan in 2001-2002 with the 19th Group, Morris was part of a raid to capture two high value targets.  One of the targets that had been identified earlier and a plan to capture him was well developed.  He was a bomb maker who was confined to a wheelchair due to injuries he sustained in practicing his trade.  The second was a target that presented itself during the planning of the first raid.  He was a very high-value target because he was associated with previous attacks outside of Afghanistan and one of the senior-most leaders in Al Qaeda.  Because the two targets were in relatively close physical proximity, the unit decided to capture both of them at the same time.  The first raid went off as planned, and Morris, along with a small group of Afghan soldiers, was sent to secure the next target.  Upon arriving at the compound where the target was staying, Morris’s unit did a reconnaissance and secured the area while the main body maneuvered up.  His unit tried using two Afghan interpreters to negotiate a peaceful surrender, but they were quickly shot and killed by Al Qaeda soldiers.  Then, the enemy began to rain hand grenades over the wall of the compound onto the remaining American and Afghan soldiers.  One of the Americans was wounded, lying on the ground in the open, and still being hit by shrapnel from additional grenades.  Disregarding his own safety and leaving the covered position he had taken, Morris moved into the blast area to pull the wounded American back to safety while enemy grenade were still exploding around him.

Shortly thereafter, Morris stood to fire his grenade launcher into the compound, when he felt a hard blow to the right side of his head and lost vision in his right eye.  He thought “I’m dead!” He stood still for several seconds thinking about that and then fired his weapon before falling to the ground.  He received first aid on site and was evacuated back to the United States.  As a result of the firefight, he lost his right eye and was medically retired in 2004.

For his actions, Morris was awarded the Bronze Star medal with “V” device for valor and the Purple Heart.  He also holds the Special Forces Tab and the Combat Infantryman’s Badge, among other awards.

Despite his injury, Morris believes it is his duty to continue to give back to his community and country.  He currently serves as the Director of the Community Preservation Department for West Valley City.