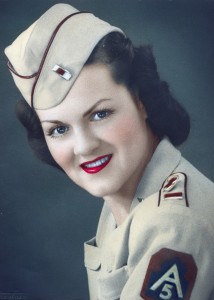 First Lieutenant Donna E. Curie Mecham grew up in rural Michigan working in the fields and attending school.  Her lifelong aspiration was to become a nurse, but her family was of limited means, so funding such an education seemed inconceivable until a friend told her that the State Hospital in Kalamazoo would put high school graduates willing to work for the hospital through nursing school.  She immediately applied and began her training in September, 1938.

Upon graduating as a Registered Nurse, she worked in the State Hospital for one year, until she was ready to realize her next goal – serving as a nurse in the Army.  She joined the Army on January 18, 1943 at Fort Sheridan, IL, where she trained, worked, and sought more exciting opportunities. She finally found one by transferring to Camp Cooke, CA, which brought with it an immediate deployment to North Africa via Atlantic voyage in August, 1943.

Despite torpedo attacks, Mecham arrived and began her duties on September 4, 1943.  The heat and the tempo of work was demanding while she cared for Allied soldiers from the U.S., Canada, Australia, and the U.K.  As the war pressed on, the field hospital proved to be too far to be a suitable base of operations, and in late November, the 34th Field Hospital arrived in Taranto, Italy.  However, their hospital equipment was sunk, and they waited a month for replacement equipment.

The unit moved closer to the front lines in February, 1944. Wanting to be closer to the front lines, Mecham put in for a transfer to the 15th Evacuation Hospital in Florence. She remained there until the fighting in the European theater ceased in May, 1945. One week after the war ended, she married Lieutenant Jack L. Mecham in Bologna, Italy. He had been part of the Headquarters Staff of the 34th. She left the Army in December, 1945.

They returned to the U.S. and settled down in Salt Lake City. Mecham continued her nursing career at the old County Hospital in Salt Lake and then moved to the University of Utah Hospital when it opened in 1965, working in Pediatrics and Clinical Research and being named Night Nursing Supervisor and Assistant Director of Nursing. She retired after 15 years of devoted service to the institution.

Mecham said, “I loved being in the Army.  It was good to me.  Of course there were many, many things that happened, things I witnessed, that I wish I could forget.”  Yet, she is keenly aware of the positive contributions she made, and she is proud to have served her country.