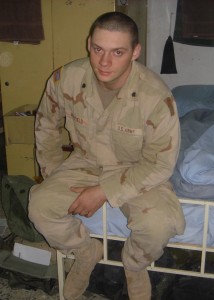 Staff Sergeant Ward Mayfield of Taylorsville, Utah served eleven years in the Army Reserve as a Combat Engineer.  His dangerous and demanding career included two tours in Iraq and one in Afghanistan.  In the execution of his duties to clear roads of IEDs, he experienced fierce firefights, as well as intense and crippling explosions. Following his first deployment to Iraq from December, 2004 to January, 2006, Mayfield felt as though he had not done enough, so he volunteered for a second deployment.

In September, 2006, Mayfield returned to Iraq.  His recent experience helped him to lead his teams in clearing routes, but the missions proved to be more dangerous this time.  Mayfield experienced two major IED explosions, the latter of which severely wounded him with shrapnel to his head and lower extremities, and led to his evacuation out of theater in August, 2007.  Not one to wait around for his medical team to extract the foreign metal from his body, he personally removed the shrapnel from his head with a pair of medical clamps.  He was returned to Madigan Army Medical Center.

After recovering from his wounds, Mayfield learned about a ramp-up for a 2009 deployment to Afghanistan.  Although he was initially determined to be non-deployable, he managed to be included in the upcoming deployment.  His unit was happy to have him, since he had a solid reputation as a great NCO and the “go to” guy when things got bad.

Afghanistan had fewer IEDs and more extreme enemy engagement than Iraq, but IEDs still presented a real danger.  Mayfield experienced four major blasts in less than a month’s time.  The last blast left him unable to read or write, but he continued to stay with his unit in a support role without going out on missions.  After returning home, he spent two years in medical treatment until February, 2014.

Following his medical retirement, the recipient of a Bronze Star and two Purple Hearts connected with the Warriors Afield Legacy Foundation, an organization comprising Purple Heart recipients.  His involvement with that organization inspired his subsequent efforts to facilitate the same positive experience for other returning veterans.