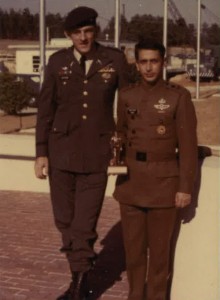 Described as a “barrel-chested coal miner” following his service, Captain Richard Justesen enlisted in the U.S. Army in 1962 and completed his basic training at Fort Ord, CA.  Despite being a man of humility, he would end up distinguishing himself in service to his country.

Justesen served two tours in Vietnam.  His first tour was with Military Assistance Command Vietnam (MACV).  During that tour, Richard was the MACV Assistant District Advisor to Tuy An District in central coastal South Vietnam.  He was responsible for training Vietnamese Popular Force soldiers and helping them conduct small unit operations in Tuy An District.

During his second tour in Vietnam, with Special Operations Group, Command and Control Central, 5th Special Forces, Justesen was injured in a combat operation when the helicopter he was boarding was fired upon.  He was subsequently medevaced to the U.S. Army Hospital at Camp Zama, Japan.

Justesen continued to distinguish himself while serving in the Army, as evidenced by his receipt of two more Bronze medals with Oak Leaf Clusters, the Air Medal, and multiple other awards.  But ever humble, he said, “The greatest honor I’ve received in my career was to serve alongside many other people in the armed forces.”