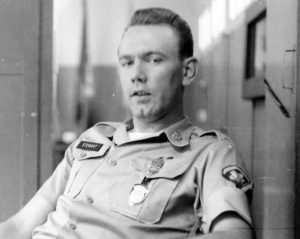 Specialist Five Gayle Stewart was born and raised in Utah. Following an LDS mission in the US southwest, he joined the Army in July 1966. After boot camp, he attended Administration schools, graduating in the top of his class and getting promoted twice in his first six months in the Army. In 1967, he was assigned to Ft. Lewis, Washington, where he was responsible for processing 4th Infantry Division personnel who were unable to deploy to Vietnam. After only eleven months in the Army, Stewart was promoted four times, earning the rank of Specialist Five.

In December 1967, he reported to Headquarters, 8th Army Special Troops in Korea, which reassigned him to the Armistice Affairs Division (AAD), United Nations Command. Stewart was assigned to the Joint Duty Office, which had a two inch yellow line to mark the border between North and South Korea. “My desk was in North Korea,” he said, as it was situated just over the line. On January 23, 1968, North Korea seized the US Navy ship the USS PUEBLO, killing one of the crew and capturing the remaining 82 crewmembers. Soon after, the US began talks with North Korea. As part of the AAD, Stewart sat at the table across from his North Korean counterpart, in support of the US flag officers who were negotiating the crew’s release. This was a dangerous time at the DMZ, with North Korean infiltrators sometimes attacking.

During breaks from negotiations, Stewart, his South Korean interpreter, and his North Korean counterpart would exchange Coca-Cola and Russian chocolate. After discussion with the US intelligence team, Stewart accepted an invitation to be the only one from the US to set foot in the North Korean’s separate building. In the building, the North Korean clerk gave him some currency, photos, and a figurine, and then asked Stewart for gifts in return. When Stewart asked what the North Korean wanted, he said, “I want you to get me a copy of Robert Louis Stevenson’s Treasure Island and the technical manual for the new US night vision goggles.” Of course, he never received those gifts.

Specialist Stewart helped put together the documents that resulted in the release of the crew, but he did more than that. Sometimes, the North Korean officers would abruptly leave negotiations, and Stewart would contact his Communist NCO counterpart for information. The chief negotiator, Major General Gilbert Woodward, US Army, noted that Stewart’s unofficial efforts helped solve many of the problems encountered during the negotiations. For his contribution during the nearly yearlong effort to obtain the crew’s release, Stewart received the Joint Services Commendation.