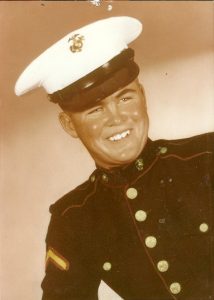 Sergeant Verne T. Nelson joined the Marine Corps in 1951, after high school graduation, at the age of 17. Shortly after turning 18, he found himself on a ship bound for Korea, where his brother was already serving. After the ship landed, the Marines were loaded on trucks headed for the location of the 11th Marines. When they arrived, Nelson got off the truck, walked about 30 yards, and ran into Cecil Nelson, his brother. He felt like angels were looking out for them.

The next day he traveled to the location of the 5th Marines, where he was assigned as a wireman. A wireman’s duty is to run phone wires from the unit headquarters to each bunker. If they were assigned to a patrol, they would have to pull wire from headquarters to where they were assigned. If the lines got blown out, which often happens under fire, a wireman had to find the damage and make repairs, day or night, so communications could continue. It is dangerous duty because they must frequently move out in the open, exposing themselves to enemy fire.

On one rainy night, communications were lost at a distant outpost. As Nelson went to find the broken wire, he slipped and rolled down under the barbed wire and into enemy territory. While trying to find his way back, he heard, “Who goes there?” to which he responded, “Wireman.” His response was followed by the sound of a rifle being cocked and a request for the password of the day. For some reason, Nelson had not received the password. He gave the sentry his name and told him that he would stay in place until the sun came up so that he could see that Nelson was “a good guy.” When morning finally came, he was able to identify himself and get back to friendly territory. Nelson recalls, “I spent a very long, lonely night on the North Korean side.”

Nelson had been in Korea for about ten months when his unit was assigned to occupy a hilltop. Shortly after getting situated, they began receiving mortar and artillery fire. There was no place to hide or take cover. Nelson was wounded, but fortunately, there was a corpsman nearby, “an angel to a wounded Marine,” he said. Nelson was evacuated to a field medical unit and then flown to a hospital in Japan for further treatment. The plane was met by a band playing the Marines’ Hymn, and for a few moments, Nelson’s pain disappeared.

Sgt Nelson, a Purple Heart recipient, said, “I wish it were all a dream. But, I’d do it all again tomorrow. Semper Fi.”