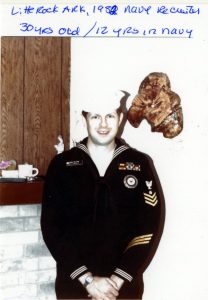 Engineman First Class Christian A. Nelson, Jr. was an 18 year old dairy farmer from Hamilton, Montana when he was drafted into service during the Vietnam War. He entered the Navy in 1970 and served in Vietnam from 1971 to 1974. Initially, he was attached to a Patrol Boat, Riverine (PBR) as an Engineman. Some of Nelson’s duties included inspections for contraband bound for the Viet Cong, inserting and retrieving Special Operations personnel and mission essential equipment, and extracting those who were wounded or killed in action.

Nelson also spent time aboard the USS JAMES E. KYES and USS GRAY, with missions including gunfire support, decoy operations, carrier defense, and pilot rescue. After one gunfire support mission, a misfired shell from a merry-go-round on a 5”/54 gun mount was rolling around on the ship deck. Without hesitation, and at great risk to themselves, Nelson and a fellow shipmate picked up the live 70 pound shell and threw it off the fantail of the ship. Within seconds, the shell exploded in the water without injury to personnel or damage to the ship.

After Vietnam, Nelson had another intense and heroic moment. At sea on the USS COOK, miles from anywhere, Nelson was on the lower level when a fuel line suddenly ruptured. At a pressure of 450 PSI, atomized fuel started spraying everywhere. Next to the break, less than three feet away, was a boiler steaming at full rate. The boiler could get so hot that some Sailors would use it to light cigarettes. Nelson immediately ran over and put his hand over the disastrous eruption. Soaking and dripping wet with the fuel that he was attempting to deflect from the boiler, Nelson stayed there, calling for the crew to shut off the line and break out firefighting equipment. At any moment, Nelson could have been immersed in flames and the boiler room could have caught on fire. As a result of his quick action at significant disregard for his own life, he prevented a major fire which could have taken the lives of crew members and caused the ship a major disaster at sea. For his selfless action, he received the Navy Achievement Medal.

When asked how he took such decisive action, Nelson said, “It wasn’t really a choice at all. You know you have to do something. Just step up and do it. That’s just what you do.”

EN1 Nelson retired from the Navy in 1993, having served honorably for 22 years.