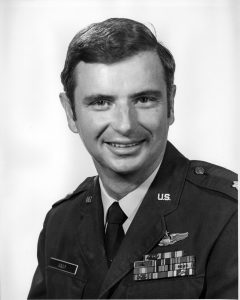 Major Roger A. Lilly, Jr. started his military career as part of the Georgetown University ROTC program. After graduation, he went to Air Force flight training. In 1961, he completed B-47 Combat Training and the Nuclear Weapons Delivery Course, and he was assigned to the 99th Bombardment Squadron, 9th Bombardment Wing at Mountain Home Air Force Base. As part of the Strategic Air Command, his responsibilities included being on a nuclear-alert team.

In 1968, he attended C-130 flight training and was stationed at Okinawa, where he flew cargo missions in and out of Vietnam.  In addition to supplies, he carried personnel, including those wounded or killed in action. He also flew bombing missions along the Ho Chi Minh trail. His cargo runs were often harrowing and dangerous. During one delivery in a Vietnam valley, the enemy fired on the aircraft from both ridges. The runway was short and shot up, and they were under heavy enemy fire, so he did not power the aircraft down when they got to the end of the runway. Instead, he told the loadmaster to kick the cargo out while he turned around and to lift the tailgate when they were airborne again. After another delivery, the C-130 took a hit on its way out. The aircraft lost one engine, a flap, and some of the hydraulics. Despite the damage, he and his copilot were able to safely land in Thailand. When they inspected the plane, there was a small hole in the underside of the wing, but on top of the wing, the exit hole was about 4 feet in diameter. It was a miracle that the wing spar was missed by only 6 inches.

After flying in and out of Vietnam for three years, Lilly was assigned to typhoon reconnaissance on the island of Guam, as part of the 54th Weather Reconnaissance Squadron at Anderson Air Force Base. This hazardous duty required Lilly to fly into, and through, typhoons. In these treacherous flights, he flew at only 10,000 feet above the ocean, while the plane shook violently and was thrown about, suddenly and unexpectedly climbing up 5,000 to 6,000 feet and then plummeting by just as much. The only way he could keep the aircraft out of the water was by carefully operating the stick while the copilot managed the speed of the engines. Lilly received one of his four Air Medals in this assignment, which is the only peacetime assignment for which the medal can be awarded.

Following other assignments, Major Lilly was stationed at Little Rock Air Force Base where he served as an instructor pilot and eventually retired, after which he flew as a civilian pilot. In his 20 years as an Air Force pilot and 15 as a civilian, Lilly flew to more than 40 countries and accrued 10,000 hours in the C-130.