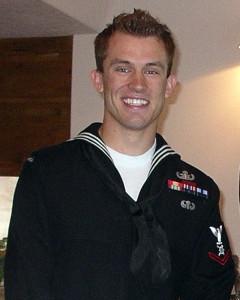 When Petty Officer Second Class John “Nick” Hansen was in high school, he was impacted by the events of September 11, 2001, which made him decide to join the military as soon as he finished high school. In 2003, he enlisted in the Navy. A year later, while serving as a Torpedoman aboard the USS ABRAHAM LINCOLN, a tsunami struck Sumatra, Indonesia and the carrier was tasked to respond. Hansen observed, “The island was completely flat, and you could see from one side to the other without a problem.” Over the following weeks, the crew collected the deceased and provided food, shelter, and medical attention to the survivors.

After a couple of years on the ship, Hansen decided to apply for the Explosive Ordnance Disposal program, which entailed a year of extremely challenging training in diving, parachuting, and disposal of chemical, biological, nuclear, and improvised explosive devices (IEDs). EOD techs are critical assets in the Global War on Terror, so Hansen was quickly deployed to Iraq after finishing the training.

From December 2007 to June 2008, Hansen was attached to Army and Marine Corps units in Iraq, predominantly in Ramadi and Baquba. During his deployment, Hansen defused or disposed of IEDs and destroyed multiple weapons caches, which were frequently booby trapped. On some days, he had so many IEDs to disarm that he had to return to the base to restock his vehicle.

In one mission with the Army, a vehicle in the convoy was struck by an IED and the Soldiers dismounted to engage the enemy. Knowing that secondary devices are common, Hansen took control of the unit and ordered the Soldiers to stay in place, despite push-back from senior officers, so that he could clear the area and ensure the safety of everyone in the convoy. During another mission, a Soldier was killed when he stepped on an IED. Again, he took control of the patrol, set up a security perimeter, cleared the area of secondary devices, and called for a medevac while medics attended to two severely wounded Soldiers. Nick said, “Watching the medics save the lives of the two wounded Soldiers made me wish to have those skills. That’s when I decided to become a doctor.” For his actions, persistence, endurance, and courage in finding and disarming countless IEDs, he was awarded the Army Commendation Medal.

After completing his service, EOD2 Hansen went to college to earn his bachelor’s degree, and he is currently a fourth-year medical student at the University of Utah. Looking back at his service, Hansen misses the camaraderie of the military and the adrenaline rush that comes with a successful mission. As the EOD Tech put it, “I had a blast in the Navy.”