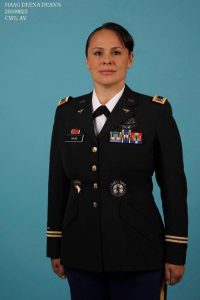 Chief Warrant Officer 3 Deena Haag was born and raised in rural Nebraska and joined the Nebraska National Guard at the age of 19. Her first experience with conflict came with deployment to Bosnia. Seeing the opportunities that the military could offer her, she began to train for greater responsibilities.

The events of 9/11 occurred during her second deployment to Kuwait from 2000-2001. By 2006, she was in flight training at Fort Rucker, Alabama. She initially flew Blackhawks for the 211th Army Aviation Battalion, then later trained for the AH-64D Apache Longbow.

In 2012, she deployed with the Utah National Guard to the Kunduz region of Afghanistan. Haag flew over 100 missions and out of 30 Apache pilots, she was selected as one of the 8 to participate in the most demanding tasks, conducting security operations for Special Operations Forces in Northern Afghanistan. This required her to operate at night in both cities and mountains, providing aerial fire support in close proximity to coalition ground forces, zeroing in on high value targets.

Haag also conducted many security missions for troops in contact, mounted and dismounted ground patrols, route clearing patrols by combat engineers, aerial convoys for utility and cargo helicopters, and aerial reconnaissance missions. She did this without one incidence of civilian casualties, friendly fire, or violation of the rules of engagement.

In one incident, Haag responded to a call for help when Afghan and Coalition Forces were pinned down by enemy fire immediately upon insertion. The landing zone (LZ) became unsafe for helicopter extraction, including medevac. While in range of enemy fire, Haag and her team cleared the LZ and ultimately eliminated the enemy threat, saving multiple US lives.

Regarding her service in Afghanistan, she said, “I’m there for the guys on the ground who need the protection I can offer. Sometimes I’m like a mother bear in how I feel towards them.” She said that the hardest part of it was leaving her daughter behind in Utah while she deployed. She also said, “I love the service – it’s a blessing. The Army takes care of me in every way.  But in the end, it’s the people I work with that matter. They are the greatest… I love being an American. I love this country.”