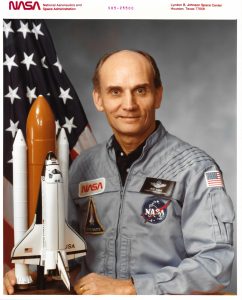 Born in Richfield, Utah to a father who was a World War I fighter pilot, it was only natural that Brigadier General Edwin (Jake) Garn would gravitate to flying. Garn graduated from the University of Utah and was commissioned through the Naval ROTC program. By 1957, he was a pilot stationed at Whidbey Island Naval Air Station in Washington, where he flew reconnaissance missions along the entire coast of China. Based at Iwakuni, Japan, he and his crew conducted reconnaissance missions that lasted ten or more hours at a time. The crew monitored all activity, including submarine movement. Because reconnaissance depended mostly on the eyes of the crew members with some assistance from radar, Garn says he got to know the coast of China better than he has ever known the coasts of the U.S.

Some flights were uneventful; others were not. On one mission, Garn’s aircraft was approached by a MiG-15. The fighter flew so close that Garn could clearly see the pilot’s face. He said, “We had no air to air guns.” After several minutes, the pilot waved and flew away. Garn still vividly remembers the pilot’s face. After seven months, the crew returned to Whidbey Island to assume other missions.

In 1960, Garn completed his Navy commitment, and in 1963, he joined the Utah Air National Guard. In the early days of America’s Vietnam involvement, Garn flew supply missions to Vietnam. Garn piloted a C-124, the largest plane in the military fleet, and not-so-affectionately known as “Old Shaky.”

He continued his public service, beginning in 1968 as a Salt Lake City Commissioner, Mayor, and then U.S. Senator for 18 years. During this time, his membership on key committees and subcommittees allowed him to be an incredibly effective proponent of spaceflight and NASA.

Garn retired from the Air Guard in 1979 as a Colonel and was later promoted to Brigadier General, following his flight with NASA.

In 1985, Garn flew aboard the Space Shuttle Discovery as a payload specialist, logging 108 orbits and 2.8 million miles.  He is the only pilot in aviation history to have wings from the Navy, Air Force, and NASA. In 1992, Garn received one of aviation’s most coveted honors, the Wright Brothers Memorial Trophy, which is bestowed annually by the National Aeronautics Association.  Garn was cited for “a lifetime of public service in government and active participation in all segments of U.S. aviation, as a military and civilian pilot, astronaut, and as one of the U.S. Senate’s most effective aerospace spokesmen and legislators.”

But for all he has achieved in life, Brig. Gen. Garn has long maintained that “My 25 years as a military pilot is my greatest accomplishment in life.”