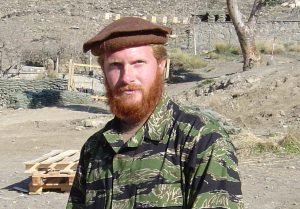 Captain Ronald Fry was born in 1972 in Anaheim, California, near the dream-like beauty of Disneyland’s fairytale kingdom and magical mountains. Young Fry never imagined that three decades later, he would become a legendary American warrior in a hostile far-off mountain region.

After graduating from Brigham Young University, Fry was commissioned in the U.S. Army through the ROTC program. In quick succession, he earned his Ranger tab, Airborne wings, and qualifications in Pathfinder, Jumpmaster, Air Assault, and Master Parachutist. His first combat mission came as an officer in the 3rd Battalion, 504th Parachute Infantry Regiment, 82nd Airborne Division. Assigned peacekeeping duties in Kosovo, Fry led his fellow paratroopers under fire.

Following the September 11, 2001 attack, Fry was ordered to active duty to lead his A-Team into mountain warfare in the cold altitudes of Afghanistan. Fry’s mission was to create and command the first operational Special Forces Base Camp in a hostile land since 1975 in Vietnam. As the A-Team and Special Forces Base Camp Commander, Fry and his men faced off with snipers, improvised explosive devices, and enemy combatants as part of their enormous responsibility of controlling hundreds of square miles of territory and denying the area to terrorists. His team patrolled villages, created checkpoints, called in airstrikes, and provided security for villages and towns.

Fry was so successful in creating bonds with the local Afghan population that CBS’s 60 Minutes profiled the operation. Named the “Red Bearded Commander” by the Afghans, he led his team in dangerous combat while facing the skepticism and obstacles from both higher command and the indigenous people he was assigned to protect. Much of what they did was his own invention, which worked magnificently well without losing a single American Soldier in the command.

CPT Fry, a Bronze Star recipient, measures his accomplishments against what he loves most. He said,

“I am extremely proud of what my men did for our country. They were as close to me as family. But then that is why we Americans wage war…for the safety and sacred love of our families. My beautiful wife Becky, my loving children Tanner, Owen, Bailey, Reagan, and Russell, I believe, are in a safer world now.”