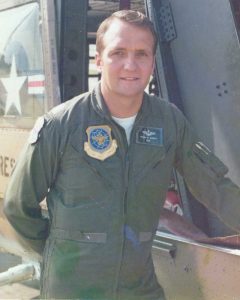 Lieutenant Colonel Fredrik M. Bergold always wanted to fly, so after high school he enrolled at Kenyon College and joined the Air Force ROTC. In 1959, Bergold completed pilot and helicopter training and then flew rescue helicopters in the Azores, Portugal, and at Luke AFB, Arizona.

In 1966, Bergold was assigned to Detachment 9, 38th Aerospace Rescue and Recovery Squadron at Pleiku, Vietnam, where he flew the HH-43F Huskie helicopter. Air Force rescue pilots were adept in instrument flying, which enabled them to carry out many missions in bad weather and low visibility when others could not. As a Detachment 9 pilot, Bergold truly came to understand their motto, “These things we do, so that others may live.”

To speed recovery operations, the pilots would come to a hover and lower their pararescuemen along with a litter. Often, Bergold had to hover over triple canopy jungle so high that he reeled out almost all of the 210-foot hoist cable. Once, he hovered for 45 minutes using a tree branch as a reference while rescuing a downed helicopter pilot who was pinned in wreckage overnight. Frequently these missions involved flying into areas under heavy enemy fire. For example, during Operation Paul Revere II, Bergold led a medevac flight of two helicopters into the fog surrounding the Chu Pong Massif mountain with hostiles firing at them. Detachment 9 made many medevacs in support of the 4th and 25th Army Infantry Divisions during heavy combat as part of Paul Revere IV. In Bergold’s first ten months in Vietnam, Detachment 9 flew 329 missions and logged 608 hours with only two Huskies. Many in Detachment 9 received awards for their actions, including Bergold, who received three Distinguished Flying Crosses.

After a year in Vietnam, Bergold reported to Sheppard AFB TX as an instructor pilot and later to Hawaii as the Western Pacific to Thailand Area Operations Staff Officer and part of the Apollo recovery team. A highlight of this tour was being an escort officer for two returning POWs from North Vietnam. He served at Udorn, Thailand where his unit made the last HH-43 rescue of the Vietnam conflict, recovering two F-4 pilots in 1975.

Lt. Col. Bergold retired at Hill AFB in 1980. His many decorations include a Purple Heart, two Meritorious Service Medals and six Air Medals. He said, “The average person does not understand how horrible war really is. Part of the reality in Vietnam was using a hose to wash the blood out of the helicopter after many recovery missions. The heroism and dedication of those serving in all of our armed forces is truly amazing and at times beyond comprehension. But in the end, war is blood and death.”