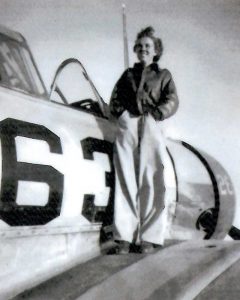 When Nell Bright was 8 years old, her dad took her to see an old World War I biplane and paid a dollar for her to go on a flight. “It was the most glorious thing in the world,” she says. “I decided then that sometime in my life I was going to fly airplanes.”

Just prior to the attack on Pearl Harbor, the Women Airforce Service Pilots (WASPs) program was formed. The program trained female pilots to test and ferry aircraft and to train other pilots in order to free up male pilots for combat roles. Bright was one of 1,830 women accepted in the program for which 25,000 applied. WASP pilots completed the same basic and advanced training as men. “We had to learn how to fly the Army way,” Bright says. “It was a tough program.” She was one of only 1,074 who earned their wings.

At the all-women airfield in Sweetwater, Texas, pilots trained seven days a week, 12 hours a day. By graduation, WASP pilots had 560 hours of ground school and 210 hours of flight training, and they knew Morse code, meteorology, military law, physics, aircraft mechanics, and navigation. WASP pilots transported every type of military aircraft, towed targets for live anti-aircraft practice, simulated strafing missions, and transported cargo. After graduation, Bright trained for an additional 200 hours on B-25s before receiving orders to Biggs Field in El Paso, where she flew a variety of aircraft and missions. As part of a tow-target squadron, Bright piloted planes while anti-aircraft crews shot at the targets she towed behind her. “It wasn’t a glamorous job,” she recalls, but, “if you didn’t know what you were doing, you were putting your life on the line.”

The WASP pilots received their wings from the Army Air Corps and had officer status, but they were civilians. Throughout the program, 38 WASP members died and one disappeared on a ferrying mission. When a WASP lost her life, another would escort the body home. The government did not pay any expenses of the women killed, and parents could not put a gold star in their window. In December 1944, after Congress failed to militarize the program, the WASP program was deactivated.

Nell Bright was part of a core group of WASPs who, along with Arizona Senator Barry Goldwater, fought for 30 years for recognition for the women pilots. In 1977, they were given veteran status and an honorable discharge, qualifying them for veterans’ benefits. In July 2009, President Barack Obama recognized the WASPs’ invaluable service during World War II with a Congressional Gold Medal. Today, less than 30 of these courageous women remain alive.