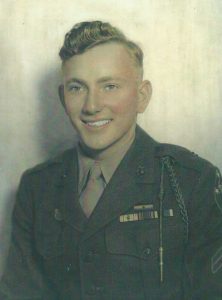 When Corporal Kenneth “Kent” Brown was 20, he was about to board a train headed for Navy indoctrination when he and 30 others were informed that they had just volunteered for the Marines.

Following boot camp, Brown reported to a machine gun platoon in the 5th Marine Division at Camp Pendleton. Soon after, Brown talked with the chaplain about a “Dear John” letter he had received. When the chaplain learned that Brown could play the organ and lead a chorus, he became the chaplain’s assistant. Soon after, the division shipped out for the invasion of Iwo Jima.

On the first day, Brown was held back and helped carry wounded aboard ship. He says, “Many knew they were dying” and had last requests about what to send home, so Brown and the chaplain took great efforts to fulfill their wishes. Under heavy fire on the second day, Brown carried desperately needed supplies to exhausted corpsmen and then spent the remainder of the day carrying stretchers, giving morphine shots, and helping wounded any way he could. Looking at the casualties on the beach, Brown thought the battle was lost, but on the fourth day, he witnessed the raising of the U.S. flag on Mount Suribachi. “We knew then we were going to win.” The battle ended 31 days later.

Later, Brown served as a replacement machine gunner with the 26th Marines. When they were having difficulty taking a hill, his commanding officer said, “We’re going to take the hill tomorrow morning. If you men have anything to write, this is the time to do it.” While the Marines sat writing letters home, a runner came up saying that the chaplain’s assistant was needed at the makeshift cemetery. The next morning, while Brown helped bury the dead, his company was mostly wiped out. Brown believes that this is one of many experiences when being the chaplain’s assistant saved his life. The 5th Marine Division was awarded a Presidential Unit Citation for their actions on Iwo Jima.

Brown was later assigned to the 2nd Division, and as they prepared for the invasion of Japan, the United States dropped nuclear bombs on the country. Brown spent 10 months as part of the occupation troops, continuing to serve as the chaplain’s assistant.

Corporal Brown says, “I learned that freedom is not free. We paid an awful price to keep that flag flying on Iwo Jima and elsewhere throughout the world. People think that we won that war easily. We didn’t. We could have easily lost it.”