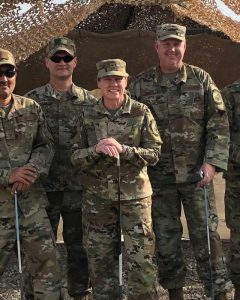 Born in Ohio and raised in Connecticut, Brigadier General Christine Burckle attended the Reserve Officer Training Corps at the University of North Carolina, Chapel Hill, where she earned a bachelor of arts in mathematics. She explains that she “would rather do math than read a lot and do reports.” Burckle wanted to be a pilot—a fighter pilot—but her vision disqualified her. Instead, she chose navigation and requested bombers, but at the time, women were not allowed to serve on combat bomber aircraft.

In 1990, Burckle graduated first in her Undergraduate Navigator Training Class at Mather Air Force Base and then served in assignments at Carswell AFB, Texas, and Mountain Home AFB, Idaho.

In 1996, she joined the Utah Air National Guard (UTANG) as a KC-135 Navigator. She deployed for operations Desert Storm, Uphold Democracy, Joint Forge, Allied Force, and Enduring Freedom. She logged more than 3,000 flying hours in the KC-135 and earned the rating of Master Navigator.

In 2016, about one-tenth of 1% of Air National Guard officers were female generals. On July 22, 2016, Burckle not only became one of them but also became the first female promoted to the rank of Brigadier General in the history of the Utah National Guard. She served as the Assistant Adjutant General – Air, with responsibilities for the operational readiness of the UTANG. Before retiring in August 2019, Burckle led the development of the first ever Utah Air National Guard 10-year Strategic Plan, forged new relationships between the Utah Air National Guard and national and local civilian and military leadership, and established programs focused on the personal and professional advancement of airmen.

Brigadier General Burckle, whose many decorations include the Legion of Merit and two Meritorious Service Medals, says, “I feel so lucky to have been able to serve our country with the best men and women I’ve ever known and truly miss that special connection you have while actively serving. But it’s also nice to have more time with my family. In retirement I’ve come to cherish the memories from my years in the service and have so much respect and love for those who are serving today.”