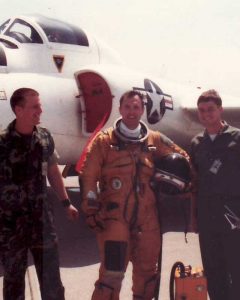 As a graduate student at Georgia Southern College in 1969, Colonel James “Jim” Dooley joined the Marine Corps. After graduation in August 1969, he completed Officer Candidate School, then the Naval Flight Officer Course, before being qualified as a Bombardier/Navigator (B/N) in the A-6 Intruder. In June 1972, he received orders to “The Rose Garden,” an austere air base in Nam Phong, Thailand.

As part of an all-weather A-6 Intruder attack squadron, Dooley conducted aerial combat missions in South Vietnam, Laos, and North Vietnam, to interdict and destroy convoys providing troops and supplies to the North Vietnamese Army (NVA) before they could reach the Ho Chi Minh Trail. His squadron’s “highway patrol” operations greatly reduced the NVA’s ability to conduct operations deep into South Vietnam and helped hasten peace talks in 1973. Dooley says his “most memorable feeling from serving in combat” comes from a July 1972 mission to engage enemy forces south of the demilitarized zone. The aircrews were briefed that anti-aircraft artillery (AAA) reportedly was “somewhere” in the area. Flying in the wingman aircraft, Dooley saw the lead A-6 roll in, then saw a flash and explosion, as the lead Intruder was hit by AAA. The pilot was killed, and the B/N ejected. Dooley found it painful to return to base, not knowing his status or being able to help recover him. And although he flew many more sorties unharmed, Dooley was severely injured when a Jeep he was in hit a water buffalo. Dooley was ejected from the vehicle and suffered a skull fracture, ending his flying service. He was released from active duty in 1973.

In 1979, Dooley earned a Ph.D. in Exercise Science. In 1984, he was commissioned as an officer in the Air Force, serving as an Aerospace Physiologist. In the 24 years that followed, Dooley made significant contributions to high-altitude and high-G aircrew flight operations. As a high-altitude flight operations training specialist, he became the first Aerospace Physiology Officer to complete high-altitude aircrew training and, at the time, one of only 125 people to ever fly at or above an altitude of 71,000 feet. Among his achievements are contributions to the development and Air Force implementation of the high-G acceleration protective ensemble, COMBAT EDGE (COMBined Advanced Technology, Enhanced Design G-Ensemble), for F-22 and, eventually, F-35 aircrews.