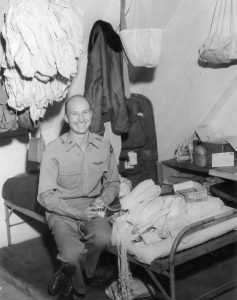 Colonel Gail “Hal” Halvorsen grew up enviously watching planes soar over the family farm in Garland, Utah. Deciding to pursue his childhood dream, he earned his private pilot license through the Civilian Pilot Training Program and joined the newly formed Civil Air Patrol. In 1942, he joined the U.S. Army Air Corps. After fighter pilot training, he was assigned to conduct foreign transport operations in the South Atlantic Theater, where he delivered supplies throughout South America and South Africa during WWII.

In 1948, the Soviet Union formed a land blockade around Berlin. Western allies launched Operation Vittles and filled cargo planes with food, fuel, and other rations to help the nearly two million starving Germans during a 15-month humanitarian airlift. Halvorsen volunteered for the mission and was reassigned. One day, while waiting for his plane to be unloaded, Halvorsen saw a group of children lined up at the fence. He saw they were hungry. He recalls, “I reached into my pocket and pulled out all that I had: two sticks of gum.” He broke them in half and told them to share. They broke the gum into smaller pieces, and when it was gone, they sniffed the wrappers. He promised them that he would return the next day to drop a load of chocolate bars from the sky and told the children that he would “wiggle my wings so they’d know which pilot had the goods.” After getting all the men at the base to pool their candy, he dropped hundreds of chocolate bars and packets of gum wrapped in parachutes made from handkerchiefs. He made many subsequent drops, delivering 23 tons of chocolate and other treats. The children gave him the nickname “Uncle Wiggly Wings,” and he became known as the Berlin Candy Bomber.

Halvorsen returned to the states and performed research and development duties with Air Force Systems Command. The most notable was the Titan III launch vehicle program, which he helped chair. He also developed plans for manned reusable spacecraft and worked on the Manned Orbital Laboratory Project. He eventually became deputy chief of staff for Research and Development at the Pentagon. For his final assignment, at the request of the Germans, Halvorsen became the commander of Berlin’s Tempelhof Airport.

Colonel Halvorsen retired after 31 years of service and more than 8,000 hours of flying time. Among his many awards are the Legion of Merit, Meritorious Service Medal, Medal of Humane Action for Berlin Airlift, Germany Commander’s Cross Order of Merit, and the Congressional Gold Medal. And for the last 72 years, the Berlin Candy Bomber has been representing the Air Force in worldwide humanitarian and good will efforts.