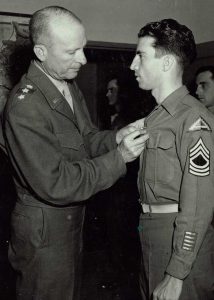 “Boy, something’s got to be done, and it’s going to be up to us to do it.” These were the words of Master Sergeant Mark L. Heyrend, shortly before joining the Army, as he drove through Malad, Idaho, and heard about the infamous day of December 7, 1941. He will tell you that he was “just doing his job” alongside other soldiers, but his expertise and work ethic earned him recognition from one of history’s greatest generals.

In May 1942, Heyrend, age 24, reported for induction into the Army in Pocatello, Idaho, and then to Fort Douglas, after which he would be assigned to a cadre receiving desert training in California. There was an immense amount of “unknown” regarding to what job, unit, or location one would be assigned. But as soon as the Army found out Heyrend could type 120 words per minute and knew shorthand, they transferred him to headquarters staff for the 7th Army Division. In one of his first experiences at headquarters, Heyrend was about to enter the operations room when a general burst out of the doors, nearly knocking him over. Heyrend asked, “Who in the world is that joker?” He was told, “Watch your tongue, soldier. That’s ol’ blood and guts Patton!” This was the same Patton from whom Heyrend would find himself taking dictation. The Army issued Heyrend a combat jacket, a Thompson, and a Remington portable typewriter. Heyrend knew this was no ordinary office job, because he had a front row seat to the planning of four D-Days and the invasions of North Africa, Sicily, Naples, and southern France.

While in France, his unit eventually made their way to Strasbourg. Here, Heyrend was a part of a group that went through a very recently abandoned concentration camp. He recounts this as one of the most puzzling creations of annihilation he has ever witnessed. Toward the end of the war, Heyrend was in the war room taking dictation when Nazi commander Hermann Goering surrendered.

Looking back at his service, Heyrend notes how much appreciation he held for his time working in the Pentagon and with Patton. There was tremendous importance in the detailed planning of operations, but that experience also represented how all branches of the military unified for a common goal. Patton was just as advertised, but the discipline he instilled garnered the admiration and respect of Heyrend. Reflecting on his service, Heyrend praises how they put forth all their effort in one concerted effort “in response to good leadership.” To this day, MSG Heyrend serves as an inspiration for his family. At 102 years young, he reminds us that bravery, valor, professionalism, and selfless service are traits not only defined by firing one’s weapon during war but also through one’s daily actions during conflict. With the same sentiment, Patton wrote a personal letter to Heyrend praising these traits.