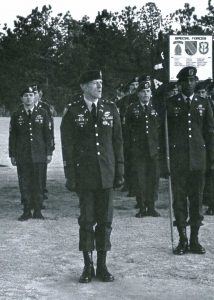 Lieutenant Colonel Jerold L. Jensen’s career began in 1957 when he enlisted in the Utah National Guard. In the Guard, he completed infantry officer, airborne, and jumpmaster training, as well as the Special Forces Officer Qualification Course. As a captain in 1968, Jensen volunteered for active duty as a Special Forces Officer, and he was assigned to the 5th Special Forces Group in Vietnam, serving as commander, Special Forces Operational Detachment A-105 and the Nong Son Civilian Irregular Defense Group (Strikers) Camp in I Corps Tactical Zone. Their mission was to fortify the camp defenses, equip and train the Striker units, and conduct interdiction missions against enemy forces moving toward Da Nang. On one of many night operations, Jensen’s patrol came under heavy fire. Jensen moved through it, deploying his forces and directing suppressive fire. Noticing three enemy soldiers pinned down, he ran down the trail “with complete disregard for his own safety” and captured one of the enemy fighters for interrogation.

In 1969, Jensen attended the Infantry Officers Advanced Course and Army Flight School, where he qualified on the U-21 aircraft. In 1971, he returned to Vietnam, serving as a platoon commander and flight operations officer of the Command Aircraft Company and logging more than 628 combat flight hours.

Jensen was assigned as executive officer, U.S. Army John F. Kennedy Center for Military Assistance, Flight Detachment at Fort Bragg in 1972, and assumed command of A Company, 3rd Battalion, 5th Special Forces Group two years later. In 1978, he was the senior aviation advisor to the Utah Army National Guard. Three years later, he served as chief of the Combat Support Coordination Team to the Republic of Korea Army Special Warfare Command. He left Korea in 1984 to serve on the Army Staff as the chief, Special Operations Forces Branch, where he dramatically revitalized the Army’s Special Operations Forces capabilities and played a seminal role in the creation of the U.S. Special Operations Command. His final assignment was as commander of Fort Douglas, Utah, where he was responsible for guiding the closure of that installation. He retired on July 31, 1992.

LTC Jensen says that he never envisioned that his service would span 35 years and give him the opportunity to serve in so many different capacities in both peace and war. In recounting those experiences, he said, “The most meaningful were those in command or leadership assignments where one could directly influence the outcome, be it at the lowest team level, as a branch chief in the Pentagon, or as an installation commander. Regardless, my most fulfilling experiences were always related to soldiers at the tip of the spear!”