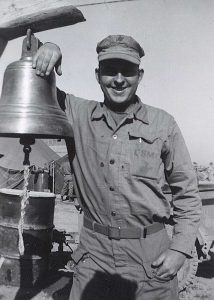 In 1948, Captain Ralph Milton enlisted in the Marine Corps, and two years later, he headed to the Korean peninsula for war. After arriving in Seoul, he became the driver for Colonel Olin Beale, commander of the First Motor Transport Battalion. The pair soon found themselves in below-freezing temperatures, entangled in the brutal battle at the Chosin Reservoir. As a Private First Class, Milton earned two Silver Star Medals for his “determined initiative, fortitude and cool courage in the face of grave peril” there.

He received the first one for taking an exposed position under intense enemy fire and neutralizing an enemy attack with relentless gunfire on November 3, 1950. His actions allowed a convoy to move forward and deliver vital supplies needed on the front lines.

Less than a month later, Milton earned his second one for his part in rescuing United Nations’ forces from a nightmarish flight across the frozen waters of the Chosin Reservoir. Under Beale’s leadership, Milton and four others went out on the ice to see why Marines and Soldiers were straggling into allied camps with unimaginable stories of ambush, pursuit,and torture. “It wasn’t a pretty picture,” Milton said. He described “the gory people” they found with gaping bullet wounds, broken bones, and frozen fingers and toes. There were many stumbling, crawling, or dragging themselves forward, and all were trying to escape the Chinese onslaught. Beale was out front finding survivors and helping load them into his jeep. Milton drove them to shore or directly to the airfield, and then he went back for more. “We stayed out on the ice for the 3rd, 4th,and 5th of December,” he said. “We froze, but we didn’t die” in temperatures that reached as low as -24° F. In the end, 320 were rescued and another 300 froze to death. His unit received two Presidential Unit Citations for their efforts in Korea.

Milton explained that when the Marines were withdrawing on the 9th, they got into “a hell of a fight” with thousands of Chinese, with just as many in front as behind them. “They called it a retreat, we just fought in a different direction,” he said. “We made it through, but a lot didn’t….”

Captain Milton also served in Vietnam and later in many assignments in which he was the sole Marine working in independent duty positions at the request of some general, admiral, or other brass. Most requests were based on his heroic actions at the Chosin Reservoir. In 1970, he retired after 22 years of service.