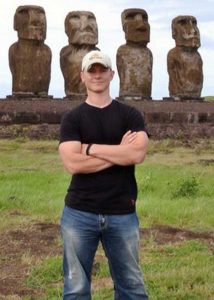 Master Sergeant Joseph Nagengast enlisted in the Air Force in 2000 and led a successful 18-year career as an airborne cryptologic linguist, electronic warfare operator, and host nation liaison. While serving in an operational role, he averaged over ‎‎180 deployment days each year, with a willingness to serve more.

After completing two years of technical training, Nagengast found himself on back-to-back deployments to the Middle East, flying combat intelligence and reconnaissance missions over Iraq and Afghanistan. In Afghanistan, Nagengast and his crew provided direct support reconnaissance to U.S. soldiers trapped by the Taliban. He and the crew provided battlespace intelligence to ground forces and directed close air support. His actions allowed the elimination of the direct threat and led to the location of a substantial Taliban command and control cell. This mission and other operations earned him two Air Medals.

In 2010, Nagengast was assigned to the U.S. Southern Command as a tactical liaison providing linguistic support and assisting with counter-terrorism and counter-drug missions, including detecting and tracking ground and air drug smuggling vessels and rescuing hostages. As a Host Nation Rider Coordinator, Nagengast provided program oversight, collaborating with foreign military and embassies at three separate operating locations in the successful execution of the U.S. President’s National Drug Control Strategy. He and other U.S. Airmen helped prevent over $40 billion of narcotics from entering the U.S., and in all, Nagengast was involved in five rescue missions. During one of these, Nagengast coordinated strategic airspace security operations and assets between U.S. and partner nations, quarantining the area, and enabling the last 10 non-civilians (four soldiers and six police officers) held captive by the Revolutionary Armed Forces of Colombia to be freed.

During another mission, Nagengast suffered a spinal cord injury. Despite intense pain, he continued his duties until a replacement arrived. His efforts led to the seizure of $300 million of cocaine and the capture of several key players in a global narco-terrorist organization. Recognizing his outstanding efforts in that mission, along with his nearly two-decade dedication to the global war on terrorism, the Colombian government awarded Nagengast the unique honor of the Colombian Distinguished Service Air Defense and Air Navigation medal. However, delaying his treatment caused more debilitating injuries and permanent damage to his spinal cord. After enduring three surgeries and years of physical therapy, and overcoming incredible odds, Master Sergeant Nagengast can walk again, carry out active daily activities, and recently returned to school.