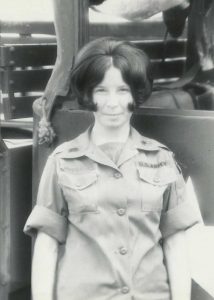 Colonel Michele “Shelly” Schneeweis was 18 years old when she signed up for the Army. In 1969, she graduated St. Luke’s School of Nursing in Massachusetts and completed basic at Fort Sam Houston, Texas, where she met her fiancé. Then, while at Fort Polk, Louisiana, he deployed to Vietnam, so she volunteered for overseas duty and received orders to the 24th Evacuation Hospital in Long Binh, near Saigon.

In the medical ward, Schneeweis cared for patients with malaria, black water fever, and illnesses that she had never heard of before. Nurses needed to keep black water fever patients urinating frequently so they would not “plug up and die.” She lost her first soldier that way. “It was hard not to take it to heart,” Schneeweis says. “You’re always thinking, ‘Could I have done more?’ ” And though she knew that her forte was working the ward, she and other nurses often felt unappreciated because they were not working with combat wounded and “getting our hands bloody.”

After a year in Southeast Asia, Schneeweis returned stateside, married, and finished her active duty at Valley Forge Army Hospital in Pennsylvania. Her husband joined the Army Reserves, and in 1985, his assignment with the Active Guard Reserves program brought them to Utah. Eighteen years after leaving the Army, Schneeweis joined the Army Reserves and served at the 328th General Hospital at Fort Douglas. In response to Desert Storm, she spent four months with the 34th General Hospital in Germany. Upon return, the 328th converted from a general hospital to a combat-support hospital, so she found an assignment in Delaware at the 2076th U.S. Army Reserve Forces School. When a former commander needed a nurse who could quickly mobilize, she again took orders to Fort Douglas, serving in the 96th Regional Readiness Command inspector general’s office and medical surgeon’s office. When the unit was decommissioned, she reported to the 807th Medical Command.

In 2009, Schneeweis was mobilized in support of the Global War on Terror and sent to Fort Hood, Texas. While assessing the medical readiness of deploying soldiers, Schneeweis heard gunfire and witnessed the chaotic aftermath of the mass shooting that killed 12 and wounded 30. “It was my unit. We lost several of our soldiers that day,” she says. For her final assignment, Schneeweis oversaw the mental health for those units affected by the shooting. She retired from her 26-year career in 2012.