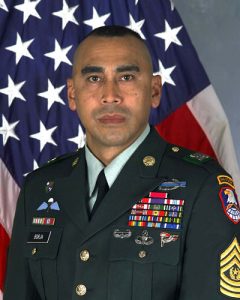 Command Sgt. Maj. Ralph Borja grew up in a strong military family. Relatives who were Airborne Rangers not-so-gently motivated him to enlist, but the idea of jumping out of airplanes, rappelling, learning tier-one tactics,and serving alongside some of the world’s most lethal warriors also helped.

After basic and Advanced Individual Training as a light infantryman, Borja completed the Ranger Indoctrination Program and joined the illustrious 75th Ranger Regiment. He said Special Operations training is unique and not for the faint of heart. Rangers train for any weather and all terrains to do quick-strike, in-and-out, one-of-a-kind operations. Borja often reminded his soldiers, “The more you sweat and sacrifice in peace, the less you’ll bleed and regret in war.”

Borja, a Master Parachutist, made his first low-altitude jump in October 1983 into Grenada. Operation Urgent Fury, despite tumultuous communications, was over quickly. His second jump was into Panama in December 1989, as part of Operation Just Cause. While clearing dictator Manuel Noriega’s headquarters, Borja was “shot up, blown up,and evacuated out,” earning a Purple Heart. Borja would later deploy to Afghanistan twice, earning a Bronze Star during one of those tours.

CSM Borja married Nguyet, his high school sweetheart, and they have raised their children to carry on with the military family tradition for another generation. “I’ve stayed the course andif I had deviated to a different MOS [military occupational specialty] my life would not have been the same,” Borja said. “I have no regrets.”