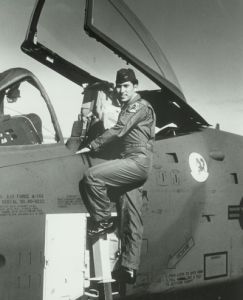 Lt. Col. Joseph Bouley will tell you that he was “just doing his job” as part of a career that was the result of “good timing and luck,” but his skills as a pilot proved unquestionable in combat.

In 1977, Bouley was a distinguished graduate of the University of Nebraska-Lincoln’s Air Force Reserve Officers Training Corps program, and two years later, he completed pilot training at Williams Air Force Base, Arizona. He was first assigned to the 19th Tactical Air Support Squadron at Osan Air Base, Korea, where he piloted OV-10A Broncos as a Forward Air Controller and Army Air Liaison Officer. In 1981, he received orders to fly the A-10A Thunderbolt II at Eielson Air Force Base, Alaska. As a member of the 18th Tactical Fighter Squadron, he provided support and overwatch in the event of a cold war threat. He was also selected to compete in “Gunsmoke 83,” as part of the Alaskan Air Command’s four-man team competing in the Air Force’s premier world-wide air-to-ground gunnery competition. After Alaska, Bouley was reassigned to the 25th Tactical Fighter Squadron, Suwon AB, Korea. During this assignment, he earned distinguished graduate honors at the USAF Fighter Weapons School at Nellis Air Force Base, Nevada. Next was an assignment as the A-10/OV-10 Operations Inspector at HQ Pacific Air Forces, Hickam Air Force Base, Hawaii.

In 1990, Bouley found himself in an F-117A Stealth Fighter known as Aces and Eights. With only 50 hours of F-117A time, he deployed to Saudi Arabia for Operations Desert Shield/Storm. Bouley was an integral part of operations as the mission planner. One particular mission required 12 fighters to hit a single target one minute apart from each other. The calculations and extraordinary skill necessary to plan and execute such a mission is a testament to the expertise of Bouley and his team. But Bouley did more than just plan missions. On his first mission, he took part in the bombing of the Osirak nuclear reactor and the North Taji Sector Operations Center. Facing heavy anti-aircraft artillery fire, surface-to-air missiles, and patrolling enemy aircraft, he was able to lean on his training to destroy the Osirak capabilities and neutralize the Iraqi’s air coordination ability. He recalls the fighter was “on autopilot flying through anti-air munitions” and hearing the ordnance whizz by as he assessed and dropped on targets. By the end of his tour, he logged 21 combat missions and over 350 total hours in the F-117A.

Bouley noted how his father, a Korea and Vietnam War veteran, imparted the value of service to him and his siblings, and he has emphasized those same values to his own children. In January 2000, Lt Col Bouley, who earned the Distinguished Flying Cross, three Meritorious Service Medals, and four Air Medals, retired from the Air Force and began piloting for United Airlines, where he still works today.