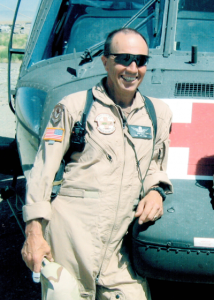 Chief Warrant Officer 5 Thomas Goff hadn’t planned on serving in the Army, let alone for 40 years. When his plans to follow in his father’s footsteps as an Air Force pilot didn’t work out, Goff’s father told him, “Join the Army. You’ll make rank quickly.” In 1969, following his father’s advice, Goff became an Infantry Officer and soon after, he was a Blues Platoon Leader. Goff quickly became a Captain, but he still wanted to fly, and in 1970, he entered flight school, taking the rank of Chief Warrant Officer 2.

A year later, Goff was a scout pilot, flying missions in Vietnam in OH-6 “Loach” helicopters. On a rare day off, Goff heard a call come over the radio. An AH-1 Cobra helicopter piloted by a friend was down, and a platoon of North Vietnamese soldiers was closing on it. A small band of South Vietnamese soldiers had formed a perimeter around the aircraft, pilot, and gunner, but they wouldn’t be able to hold off the enemy for long. Although the Loach was typically accompanied by a Cobra to form a hunter-killer team, there wasn’t time to wait. Goff climbed into his Loach and took off. Using the Loach’s two M134 mini-guns capable of firing up to 4,000 rounds a minute, Goff neutralized most of the enemy soldiers and rescued the downed crew. Goff said, “I knew I was either going to get a court martial or a medal for what I did.” Goff received two medals—the Distinguished Flying Cross for his actions and a Purple Heart for the round that clipped him in the process. The wound was bad enough to pull him out of Vietnam but not to keep him from entering the National Guard and serving as a medevac pilot in units across the nation.

Thirty-one years after Vietnam, at the age of 55, deployed to Bagram, Afghanistan to fly medevac missions for the 10th Mountain and 82nd Airborne Divisions. During his eight months there, his unit, comprising six helos and their crews, flew more than 450 missions, rescuing wounded Soldiers, and sometimes, wounded Afghan children. When asked if there were circumstances, such as bad weather or heavy enemy fire, when he couldn’t get to wounded Soldiers, Goff said, “There is no ‘You can’t get in’ as a medevac pilot.” For his exceptional performance of duties, Goff received the Bronze Star. After returning from Afghanistan, Goff found the outpouring of public support and gratitude to be a healing experience, after the treatment that he and most other Vietnam veterans received when they came home.

Before retiring, CW5 Goff flew more than 19,000 hours in uniform and another 6,000 as a civilian. He also received the Legion of Merit, nine Air Medals, and multiple other decorations. Flying seems to be in the Goff DNA. Not only is he the son of an Air Force pilot, but also the father of one, and his daughter flies commercial aircraft.