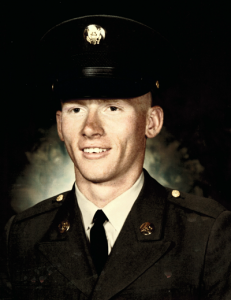 After completing one year of studies at the University of Utah and reading the news about several neighborhood friends killed in Vietnam, Staff Sergeant Terry Hoecherl decided he had to do his part, despite his college draft deferment. In 1967, he joined the Army, became a combat medic, and volunteered for Vietnam. He was assigned to the 1st Infantry Division, where he served for one year and then extended his tour for another six months.

As a platoon’s medic, Hoecherl quickly found himself in combat. During one firefight, he had to kill a North Vietnamese Army (NVA) soldier with his rifle. Trained to save lives, Hoecherl was so deeply affected by the experience that he turned in his rifle and ammo in order to carry more medical supplies and provide more lifesaving assistance to his soldiers. Soon after, his company was engaged in another firefight, and his platoon was spread out over a wide area. While rendering aid to a wounded soldier, Hoecherl heard a noise behind him and turned around to see a Vietcong soldier charging at him with a shotgun. As the enemy soldier approached and raised the weapon, Hoecherl grabbed the barrel and pushed it toward the ground, but the weapon fired and hit him just above his right knee. During the hand-to-hand combat that followed, Hoecherl managed to take the Vietcong’s bayonet and kill him with it.

Shortly before Hoecherl went home, his company was ambushed during a patrol. While he was rendering aid to a badly wounded soldier, his platoon pursued the NVA unit into the jungle, leaving Hoecherl and the wounded soldier behind. When Hoecherl looked up, all he saw was AK-47s and NVA soldiers surrounding them. They forced Hoecherl to treat their wounded, then they began to beat him with their rifle butts, knocking teeth out and breaking several ribs. While he lay on the ground unable to fight any longer, they began to burn him with cigarettes. He was tied to a tree that night as a prisoner of war. In the morning, they moved through the jungle, eventually entering a clearing, where an American patrol opened fire and killed the lead NVA soldier. The others scattered into the jungle. Hoecherl raced toward the clearing confident that he wouldn’t be shot—he was taller than his captors and had red hair. He was right.

Hoecherl, who received two Bronze Stars for valor, three Army Commendations for valor, a Purple Heart, and other decorations, says, “Vietnam was a very difficult experience, but I feel like much of the man that I have become was forged in the fires of adversity in Vietnam. And though I do not want to repeat the experience, I am grateful for it.”