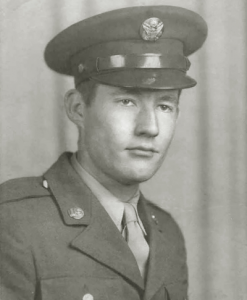 Sgt. 1st Class Leland Hortman will tell you the secret to living a long life is hard work, and he’s never been afraid of it. Born in 1925, Hortman grew up picking cotton and hunting on his family farm in Louisiana. He graduated in 1943, and in August 1944, he was drafted into the Army infantry.

After basic training, Hortman shipped out and met up with the 90th Infantry Division in Metz, France. For nearly 400 miles, he traveled in full gear on foot and by tank until he was about 60 miles from Prague, Czechoslovakia. Along the entire way his unit was engaged in combat with the Germans. A “big boy” at 6 feet, 2 inches tall, and 210 pounds, Hortman became the unit’s “Bazooka Man” and cradled the big weapon against his chest as they marched. Later, with the Browning Automatic Rifle as his constant companion and two bandoliers of ammo around his neck, he took up position as point man.

Hortman’s unit made many river crossings, but the most memorable was the Rhine. Just after midnight, they crossed the dark waters using rafts made with railroad ties by Army engineers. Each raft carried six Soldiers who used the butts of their rifles for paddles. They made it to shore before encountering enemy fire. As Hortman made a 1,000-yard run to the tree line, a bullet cut his gas mask from his utility belt, another sliced through his two bandoliers, and a third passed through the folds of his field jacket, making 14 holes in the fabric and leaving a burn on his shoulder.

In another close call, after clearing a small German village. A mortar round exploded near Hortman and caused pieces of pulverized brick to strike him in his mid-section. Although he was eligible for the Purple Heart, he refused it because he knew it would emotionally devastate his mother if it was sent home.

Hortman’s unit discovered the Merker Salt Mines where the Germans had stored millions of pounds of gold and silver and thousands of priceless paintings that were looted during the war, and near the final days of the war, Hortman’s regiment liberated the Flossenbürg concentration camp. They pressed onward to Prague where they learned the war had ended but still had some skirmishes with German soldiers who wouldn’t give up the fight.

Sgt. 1st Class Hortman earned his Combat Infantry Badge for 136 days of combat. He was discharged in July 1946. “War was hard,” said Hortman, but he’s glad he had the opportunity to serve his country. “I wouldn’t take a million dollars for the experience, but I wouldn’t give a penny for another one like it.”