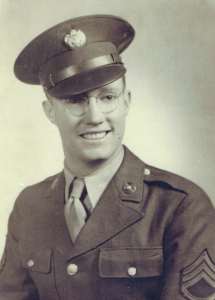 As a radar technician, Master Sgt. Earl Jacklin was placed on the critical military occupational specialty list from the time he was drafted in January 1942 until he came home in October 1945. With few school-trained radar men in the Army, his skillset and time were in constant demand.

After basic and a brief stint as a battery clerk, Jacklin volunteered to go to radio school. Of the 300 applicants, Jacklin was one of only 50 accepted. After eight months of training on electronics and radar equipment, he landed in Texas at an anti-aircraft artillery post. After months of training in the desert, he was singled out and assigned to the 216th Gun Battalion, leaving the next morning for North Africa.

In Algiers, Tunisia, and Sicily, the artillery group’s five radars were put into service protecting Allied airfields. Moving north into Italy, they covered infantry units near the frontlines, and Jacklin kept “all in readiness.” During the Battle for Anzio Beach, constant bombardment tested the battalion’s survival for 135 days. “The dugouts we were living in were just about the size of a grave. And for some, it become just that,” Jacklin recalled.

A man of great faith, Jacklin believes that men who had strong religious backgrounds most successfully bore the strain of battle. “You can’t imagine what being under the threat of imminent death at any moment for months on end does to a man’s mind and spirit.” He tells about a particular time that he was facing danger. One night, while on a radar check, he was picking up a Jeep from the motor pool when Germans hit a nearby ammunition dump. “I could feel the shells exploding and hear the shrapnel slicing through the trees.” Somehow, he managed to get away without being hit. The next morning, four shrapnel holes were found along one of the doors of the Jeep. Another time while escaping the strafing of a German plane, he found himself submerged in the camp’s garbage dump.

Jacklin received the Bronze Star for keeping the battalion’s five radars on the Anzio Beachhead in action while “often called to the job late at night, across roads under shellfire.” He was also commended for quickly putting new types of radars into service at a time “when skilled maintenance men were urgently needed.”

After the war, Master Sgt. Jacklin spent “nine years getting five years of schooling” at the University of Utah, earning a master’s degree in electrical engineering and working in the aerospace industry before retiring.