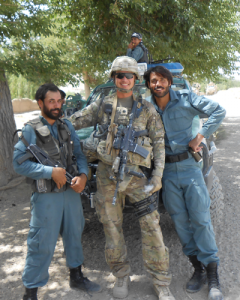 In 1994, Lt. Col. Glenn Johnson graduated from Weber State University through the Army Reserve Officer Training Corps program. He became an Infantry Officer, serving in Korea and Georgia, before being assigned to the 5th Special Forces Group in 1999.

On December 7, 2001, less than two months after 9/11, Johnson deployed to Afghanistan. He was assigned to Combined Joint Special Operations Task Force KBAR. Johnson was the lead planner for two joint coalition missions and assisted in mission analysis of four other high-value targets deep in Afghanistan. During the first joint combined mission of Operation Enduring Freedom, he was assault force commander, and in three more raids that followed, his unit neutralized several enemy fighters, took several dozen prisoners, and collected valuable intelligence, multiple land mines, anti-aircraft weapons, and mortars. For his actions, Johnson received his first of three Bronze Star Medals.

During his final deployment to Afghanistan was in 2012, where Johnson served as Task Force Thunderbolt’s Security Assistance Team Leader. He established a strong partnership with his Afghan Uniformed Police counterparts, taught police basics, and trained police trainers. To gain and build the confidence of the Afghan Police, he fought alongside them in every firefight they had, setting an example of courage and composure under fire.

Lt. Col. Johnson, recipient of the Legion of Merit, three Bronze Stars, and multiple other decorations, deployed overseas approximately 30 times. Five of these were combat deployments—three to Afghanistan, one to Iraq, and one to Africa. He said, “Striving to live up to the moniker ‘Doer of Deeds’ required me to risk everything to support my country and the fellow warriors I fought beside. These warriors molded me into the man I am today,” and he honors them with the toast, “Here’s to us and those like us. Damn few left!”