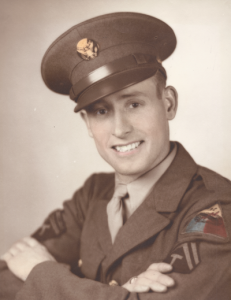 Even after Pearl Harbor was attacked, Staff Sgt. Stanley Nance never really saw himself going to war. He was 24, newly married, and working full-time when he was drafted in October 1942. He did basic as part of the 42nd Armored Infantry Regiment. He wasn’t in the Army a month before making Corporal.

Nance became a 766 high-speed radio operator, after graduating at the top of his class. He was able to transmit Morse code at a remarkable 65 words per minute by using a strumming method instead of the tradition up-down tapping method. He adapted his own technique from playing the ukulele as a missionary in Tahiti before being drafted.

In May 1944, while training in the Mohave Desert, Nance was selected for Signal Company of the newly formed 23rd Headquarters Special Troops, joining the ranks of 1,100 others in what would become known as “the Ghost Army.” Composed mostly of artists, actors, designers, and sound engineers, with a few official Soldiers mixed in, they had unusual orders: not to avoid detection by enemy forces, but to actively attract attention through deception and ingenious optical illusion. Their tactics were to impersonate other Allied units by using inflatable tanks and jeeps and blasting ambient noises from massive speakers to make it seem like large forces were on the move. They could move quickly and silently under cover of darkness. “We could take those dummies, bale them up, put them in trucks, and be 50 miles away in as little as six hours. It normally took three days for a division to move that far,” Nance explained. “We would mimic the ‘real unit’ when a major thrust was planned for the day. We went where we were needed.”

Nance was assigned a large truck usually used as a weapons carrier, but hidden in the back was a powerful radio set, antenna, and generator. “I knew my radio and could operate it very, very quickly,” he said. Some missions were with other people, mostly he was alone. “I drove all over France, Germany, Belgium, and Holland.”

Their top secret mission kept them from recognition and from speaking about the Ghost Army until it was declassified in 1985. Staff Sgt. Nance, one of only 14 surviving members of the Ghost Army, was simply issued the European-African-Middle Eastern Campaign Medal with five bronze stars representing campaigns he took part in. However, the Commanding General of the 12th Army Group issued a unit commendation expressing his “appreciation for the careful planning, minute attention to detail, and diligent execution of the role they played in the crossing of the Rhine River”—the last German line of defense.