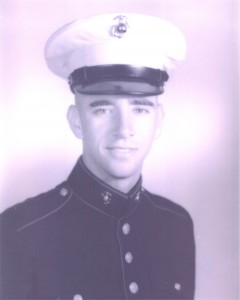 It all began in 1950 when a friend dared seventeen-year-old James Andrews to join the Marine Corps with him.

Less than a year later, on September 12, 1951, a general would focus his binoculars on a heavily fortified hill in Korea that was erupting with enemy automatic rifle and grenade fire.  Two of his men were near the top, sitting back-to-back, and engaging the enemy. The rest of the platoon was at the base of the hill pinned down by fire coming from the bunkers and trenches above.

The two soldiers were Private First Class Andrews and PFC Vernie Collins. They had been made platoon point men because of their remarkable skill and intuition, and it was their ability to locate and avoid several enemy mines and trip wires that enabled them to reach a position on Hill 673 undetected.  Halfway up, Andrews spotted a well-camouflaged bunker. Andrews threw in a grenade, and the entire hillside erupted with fire from the enemy and from their own base below.

As they continued to work their way up the hill – while shouting to their platoon below to cease fire – grenades showered down from the ridgeline above them. Andrews was hit in the back by shrapnel. He took off his jacket to have Collins check the wound, which Collins said was just a scratch.  They worked left and could see a second bunker below with a trench connecting it to the first bunker.  Thinking they were doomed, Andrews says their only thought was to take as many of the enemy with them as they could.

Sitting back to back, Andrews took out five enemy soldiers in the trench while Collins shot anyone on the ridgeline who showed himself. Andrews climbed down to the still-active bunker while Collins returned to the squad to assist the wounded. A grenade thrown from the bunker blew Andrews into the air and destroyed his rifle. Andrews climbed on top of the bunker, reached over the front and threw a grenade into it. He then descended the hill to find his squad mostly dead or wounded.

Collins was helping a wounded soldier when he was hit. Andrews then attended to Collins. Another grenade exploded, blowing Andrews off his feet a second time. Two machine gunners came up the hill. Andrews took both of them with him up the hill. As they entered a trench, one was shot in the head. Seconds later, the other machine gunner was also shot in the head. Andrews, armed with only his pistol, located the enemy sniper popping up from a hole and shot him. Another platoon arrived, and Andrews rallied this platoon to follow him up the hill to finally secure it.

Six months before his three year enlistment was up, Andrews was offered a commission that he declined. He separated from the Marine Corps as a Staff Sergeant with a Silver Star and two Purple Hearts. Of his experience, he says, “I didn’t think I had a snowball’s chance in Hell of getting out alive but I would give my life at any time for any one in my squad.”