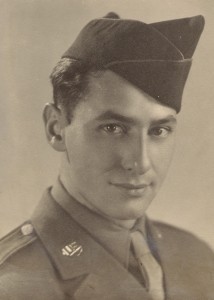 Gilchrist “Gil” Booth entered the military on May 10, 1943, a date he remembers well because it was his daughter’s third birthday.  He was sent to Fort Knox, Kentucky, where he went to radio school to learn Morse code.  Once he was sent overseas, Booth was assigned as a replacement loader/cannoner and gunner in the 743rd Tank Battalion.  The unit was in the infamous hedgerows of Normandy when Booth joined them, but they (fought) on to Holland and Belgium and then to Aachen, Germany.  Booth recalls that they thought the war was almost over at that point, but it was the beginning of the Battle of the Bulge.  They were sent to Belgium, which Booth admits wasn’t an idea he liked very much.

Booth received the Silver Star for his actions in saving a fellow soldier. He recalls that one night, his unit pulled into a little town, flanked on one side by a brick wall, and on the other side by a pine tree. The soldiers flipped a coin to see which side Booth’s unit would take and which side another unit would take.  Booth’s unit took the side with the brick wall.

All of the crew members that were able went inside a building to stretch out, since the Germans were retreating and it was quiet.  They left two men on guard in the tank – one to sleep, one to guard.  Booth took the first guard shift, and then went to sleep.  He woke up and saw that the tank at the other end of the town was on fire, and he ran over and pulled one man out, but couldn’t save the other.  Afterward, the unit’s medic asked if Booth wanted him to take a look at his injuries, which was the first time Booth realized that his hands were blistered and his eyebrows were singed off.  Booth said he “didn’t really think much” about his heroic actions that day.  He notes, “To me it was no big deal.  If you hear someone screaming for help, you’ve got to try and help.”  He recalled that his award was kind of a joke around the unit – they called him the “Silver Star Private.”

When recalling his service, Booth noted that it was “like a terrible thing that happened, but it could have been worse.”  He recalls, “I was naïve and I thought if we win this one, we’ll have peace forever.”