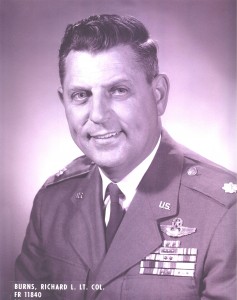 Richard Lee Burns was born in Philadelphia, PA.  After high school he enrolled in Valley Forge Military Academy where he completed two years of college. He was waiting for entry into the Flying Cadet program when he received his orders to report.

After graduation from advanced training Burns was sent to fighter school.  He says he would have gone to bomber school had he been bigger. Burns spent about 6 months training in a P-47 and his group was considered one of the best at that time. They were shipped out to India and arrived in Caroche, India after 52 days. They sailed down around the horn, zig-zagging all the way to avoid German sub attacks.

When they finally arrived at their destination, they found out that the ship with their aircraft on it had been sunk. Burns and his men took over the aircraft from the mercenary group called the Flying Tigers and flew as escort cover for the C-46 cargo airplanes flying supplies to the Chinese Army over “the hump,” the eastern-most flank of the Himalaya. Burns also flew dive-bombing and strafing missions in support of the infantry.  He flew 152 combat missions during this time.

After WW II, Burns was assigned to Japan as part of the American Occupational Force.  He was also able to take his family to Japan with him. This is where he was when the Korean War broke out.  He and his family remained in Japan, where he was assigned to the Air Rescue Squadron flying from Japan to rescue downed pilots, some behind the enemy lines.  He flew SB-17, C-47 and SA-16 aircraft as part of this assignment and completed 34 missions.

Burns was next stationed stateside in Washington, D.C. and Orlando, Florida with the Air Rescue Service. He then earned his BBA (Business Management) degree at the University of Oklahoma. Afterward, he went to Fairbanks, Alaska assigned to the Air Defense Command. He was then transferred to Colorado Springs, Co. as a Staff Officer with NORAD and CONAD. His last assignment with at Dugway Proving Grounds in Utah as the Senior AF Representative associated with the U.S. Army Chemical Command testing of chemical and biological agents.

Burns retired in 1969, while assigned to the Dugway Proving Grounds, as a Lt. Colonel.