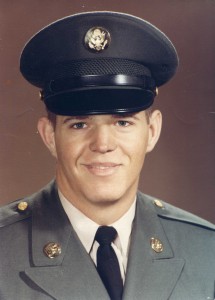 On the night of October 9, 1967, near Bong Son in the southern part of II Corps in the Republic of Vietnam, 20-year-old machine gunner and demolition expert — Richard S. Dixon — was traveling with ten members of his squad in a two-vehicle convoy returning to their 35th Combat Engineer Base Camp. In the dark and the rain, the convoy was ambushed by at least two dozen Viet Cong soldiers firing machine guns, rocket-propelled grenades (RPGs), and AK-47 rifles. One RPG round struck the dump truck in which Dixon was riding with seven of his buddies. The explosion knocked the truck off the road. A second round ignited the truck’s gas tank and set it and several U.S. soldiers ablaze. The unit’s jeep was hit by machine gun fire, which killed the Company XO and his driver.

Dixon was riddled with shrapnel in both legs and feet. He jumped out of the bed of the burning dump truck and was hit in his right forearm by rifle fire, which blew his M79 grenade launcher out of his hand.  Although he had a compound fracture of his right forearm, Dixon returned fire with his sidearm until the pistol jammed. He retrieved another pistol from the body of his Company XO and returned fire at close range until an enemy grenade exploded three feet in front of him. The grenade blast shredded his liver, stomach, and intestines which protruded from his open belly. Although grievously wounded, Dixon continued to fire his pistol at virtually pointblank range.

The VC force suddenly broke off contact and disengaged when parachute flares fired from a nearby Republic of Korea 105-mm howitzer battery lit up the area, where Dixon’s squad sustained 100% casualties. Dixon lay in the mud and rain alone for 15 minutes until a relief force arrived from his base camp. He was flown by medevac helicopter to the 311th Field Hospital at Qui Nhon Bay on the South China Sea. Over the next seven months Dixon underwent many surgeries and at one point his weight dropped to 115 pounds. While he was in the hospital at Qui Nhon Bay, GEN William Westmoreland—the Commander of Armed Forces Vietnam—personally presented Dixon with a Purple Heart for the wounds he sustained during the ambush.